Everybody’s Got a Right to Live Propaganda Party 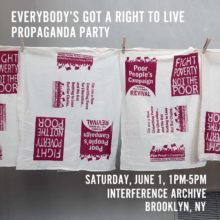 What is a propaganda party? It’s where we invite organizations, activists, designers, and folks like you to come together, share and learn new skills, and produce graphic materials in support of a cause. At this event we will gather to print posters, t-shirts & patches, make buttons and stencils, and paint banners for the upcoming Poor People’s Congress – which will bring poor people, advocates, and local grassroots leaders from over 40 states to Washington D.C. to strategize, impact policy, and continue to build power among the 140 poor people living in the USA today.

During the Congress, the Campaign will launch the Poor People’s Moral Budget which shows practically and concretely how to enact the demands (now on exhibition at the Interference Archive – come check it out!) to alleviate poverty and address the root causes — systemic racism, ecological devastation, the military economy, and a distorted narrative which blames poverty on the poor. A Hearing with the people most impacted by these injustices will be held as well as a Forum in which poor people from across the nation will have the opportunity to ask questions directly of 2020 Presidential Candidates and to lift up the issues that are urgent in our communities.

Why do we use the word “propaganda”? “Propaganda,” from the same root as “propagate,” refers to information that is shared in support of a cause. In modern times, the word propaganda has been weighted with negative connotations; we aim to reclaim the word. Our daily lives are saturated with supposedly “neutral” material that implicitly supports existing power structures. We use the word propaganda because we have no desire to feign neutrality.