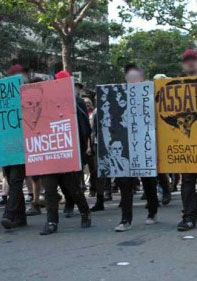 Shields from CUNY and Cooper Union
April 2–24, 2013
Opening Reception:
Tuesday, April 2
7–10 pm
Book blocs in their present-day incarnation first appeared in Rome in November 2010 as part of demonstrations against drastic budget cuts to the country’s public university system. Italian students began actions, occupations, and blockades by using oversize, handmade, padded book covers as banners and shields. The tactic quickly spread to other parts of Europe, the United States, and elsewhere. As a book bloc press release from London in 2010 explains, “The book bloc joins the student and public sector workers’ protest to affirm and defend what is under attack: Our universities and public libraries, literacy, thought, culture and jobs. . . . When the police kettle us, baton us, or charge us, we will not only see police violence against individuals but the state’s violence against free thought, expression, and education. Books are our tools–we teach with them, we learn with them, we play with them, we create with them, we make love with them, and sometimes, we must fight with them.”
Interference Archive’s Book Bloc! exhibit features shields made here in New York by CUNY and Cooper Union students in their current struggles against tuition increases and instituting tuition, respectively, and in assertion of “free education for all.”