From NAFTA to TPP: A Panel on the The Zapatista Uprising at 20 and Free Trade Resistance in Mexico, Peru, and the United States 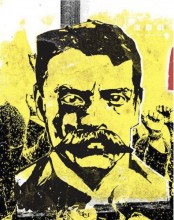 Join TradeJustice New York Metro and the Interference Archive for a panel discussion on resistance to pro-corporate free trade agreements – from the Zapatistas to grassroots activism in New York City.

20 years ago, the Zapatista uprising began on the day the North American Free Trade Agreement went into effect. Two decades later, popular movements in Mexico, the United States, and around the world are still resisting the use of trade agreements as a tool of corporate domination. The governments of the United States, Mexico, and 10 other nations are currently negotiating the Trans-Pacific Partnership (TPP), a massive new trade deal described as NAFTA on steroids. In February 2014, 65,000 people protested the TPP in Mexico City, while an activist movement in the United States has effectively stymied effort by President Obama to grant him authority to Fast Track TPP through Congress at the completion of the negotiations.

Join a panel of journalists and activists to learn about:

– Bill Weinberg is an award-winning 25-year veteran journalist in the fields of human rights, indigenous peoples, ecology and war. He is the author of Homage to Chiapas: The New Indigenous Struggles in Mexico (Verso Books, 2000), and War on the Land: Ecology and Politics in Central America (Zed Books, 1991).

– Elliot Sperber is a writer, attorney, and researcher/fellow with the UK-based Heathwood Institute and Press. Focusing on legal theory, political theory, and human rights, Elliot is a regular contributor to CounterPunch, and a member of the Occupy Wall Street Zapatista Solidarity Network.

– Malou H.D.T. (Malú Huacuja del Toro) is a Mexican author, playwright and screenwriter with more than 10 published books in Spanish who has been supporting the Zapatista fight for 20 years and was part of the movement of intellectuals and artists fighting NAFTA in Mexico. She just published a collective book written by independent journalists both in Mexico and the US about the effects of NAFTA in Mexican culture, named “Salinas Reloaded” (“Salinato Versión 2.0”). She translated into English the Zapatista Freedom School online and is part of the OWS Zapatista Solidarity Network.

– Manuel Pérez-Rocha helps to coordinate the Networking for Justice on Global Investment project, as part of the Institute for Policy Studies Global Economy Project. Prior to moving to Washington, DC in 2006, he worked for many years with the Mexican Action Network on Free Trade (RMALC) and continues to be a member of that coalition’s executive committee.