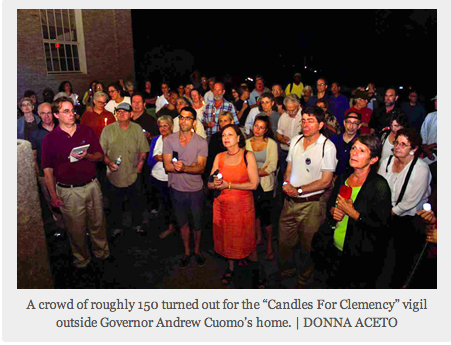 On Primary Eve, Cuomo Pressed at Home on Prisoner Clemency

BY NATHAN RILEY
A candlelight protest outside Governor Andrew Cuomo’s pastoral Westchester County home delivered a demand that he grant clemency to elderly prisoners with extensive records of good behavior.
The coalition of prisoners’ rights activists, feminists, and gays, in a September 6 early evening vigil, charged the governor has granted no petitions for clemency to prisoners, while former New York Governor Hugh Carey, between 1975 and 1982, granted 155 and Ronald Reagan granted 575 while in the California State House from 1967 until 1975.
A former chairman of the New York State Parole Board, Robert Dennison, called it “astonishing” that Cuomo could not find that “even one prisoner deserves clemency” and warned this failure will add to “rising” public concern about “abuses in the criminal justice system.”
Harsh sentences are driving a sharp spike in the number of prisoners over 60 years old in New York State prisons. In 2000, that group accounted for 1.2 percent of the prison population. By 2007, it had increased to 2.5 percent, and in 2013 it was 4 percent, with no sign of the growth leveling off. Between 2007 and 2013, this population climbed from 1,574 to 2,104, a 34 percent increase. Even though these prisoners’ medical bills are expensive and they pose a small risk to the public, New York policy hasn’t softened.
Prisoners’ rights groups have long been frustrated by the governor’s refusal to act. Attorney Sara Bennett said petitions she has filed on behalf of inmates don’t get denied, they simply go unanswered. She represents Judith Clark, a lesbian, who drove the getaway car in a 1981 robbery of a Brinks armored car in which a Brinks guard and two police officers were killed. She has been in prison for 33 years and mentors young mothers serving short sentences who give birth in prison. A crowd of roughly 150 turned out for the “Candles For Clemency” vigil outside Governor Andrew Cuomo’s home.
Prisoners’ rights groups argue that convicts’ lives are more than just the bad acts of their youth, that their good behavior and subsequent efforts to redeem themselves are real, and that should make for opportunities for release.
A veteran gay activist and political organizer, Allen Roskoff, heard about Clark’s plight and proposed the groups form a coalition “Candles for Clemency” to conduct a vigil at the governor’s Mount Kisco home. Their goal, vigil leaders said, was to call attention to what they described as Cuomo’s “heartless” refusal to offer executive clemency.
The idea quickly attracted an enthusiastic response. Roskoff, the president of the Jim Owles Liberal Democratic Club, an LGBT group, enlisted the help of Tony Hoffman, president of the Village Independent Democrats (VID), who organized a bus from Chelsea to Westchester. Kathryn Erbe, who starred in “Law and Order: Criminal Intent,” co-emceed the vigil and organized participants from the entertainment industry.
Catherine Curtin, an actor in the hit Netflix series “Orange is the New Black” –– in which an affluent white woman is incarcerated in a prison in which most of the inmates are poor women of color –– spoke at the vigil, emphasizing the possibility of rehabilitation. Women who are released, she said, have much to give back to their communities and praised Whole Foods for hiring and promoting ex-offenders.
In all, about 150 people showed up to make a respectful but adamant demand that the governor stop stonewalling when it comes to requests for mercy.
In stirring remarks, Donna Hylton, who was released after 27 years in prison, recounted the silent scream she –– and other inmates –– felt when even after their best efforts, parole officials wouldn’t believe they had changed.
“We know the depth of what we have done, but we are no longer what we were,” she said, her voice cracking. Another former inmate, Laura Whitehorn –– who is the partner of Gay City News columnist Susie Day –– decried “a system of permanent punishment” and urged a new focus on “what we are doing with our lives now.”
On the bus ride up to Mount Kisco, one former inmate who asked that his name not be used said the government must reverse direction.
“The United States is confronting a crisis of mass incarceration,” he said. “We should do all the methods to reduce” the prison population and to curtail policies that feed the prison system.
Roskoff drew cheers by promising, “If clemencies are not issued before the holiday season, we will be back again.”
Speaking to the energy shown by the diverse coalition of groups, groups, Bill Dobbs, a veteran gay activist and civil liberties advocate, said the event signaled the gay movement was “starting to open our eyes to criminal justice issues.” The focus of community efforts, he said, has, to date, “been all about locking up” gay bashers, but “the larger justice issues” were missed.
Among the concerns voiced by speakers at the vigil were the treatment of incarcerated LGBT youth, the spread of HIV in prisons, and that punishment is meted out in a discriminatory manner. People of color go to prison, speakers said, while white offenders doing the same thing go unpunished or receive light sentences –– a claim backed up by incarceration rates for drug offenses.
Other public events are scheduled. From September 11 to November 16, the Interference Archive, at 131 Eighth Street near Third Avenue in the Gowanus section of Brooklyn, will host “Self-Determination Inside/ Out,” an exhibition of materials created by inmates. The aim, the group says, is to show “incarcerated people not simply as objects of state repression or social justice activism, but as active initiators and leaders in the critique of criminal justice.”
For Hoffman of VID, the cause is “honorable and important.” It offers help to “people who are suffering and they are not very popular.”
Both VID and the Jim Owles Club have endorsed Cuomo’s September 9 Democratic primary challenger, law professor Zephyr Teachout.
This article was originally published at http://gaycitynews.nyc/primary-eve-cuomo-pressed-home-prisoner-clemency/