Gowanus Rezone: Working Toward a Sustainable Future through Environmental Justice 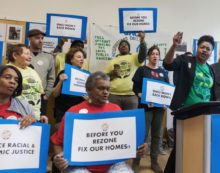 How does neighborhood rezoning affect housing, racial, and environmental justice? Join Interference Archive for a conversation with residents and activists for a discussion about the past, present, and future of Gowanus.

In 2019 the New York City Department of City Planning (DCP) released a Draft Rezoning Proposal for Gowanus that would fundamentally alter the skyline and character of the neighborhood, potentially displace low income residents, artists, and industrial businesses, privatize public park land, and generate new environmental concerns in a flood-prone area that is already home to a superfund site. The DCP proposal launched a resistance movement and ignited debates about what housing justice, racial justice, and environmental justice means in the context of neighborhood rezoning.

This community conversation will be led by members of the Gowanus Neighborhood Coalition for Justice (GNCJ), author and historian Joseph Alexiou, and architect and sustainability advocate Thomas Kosbau. Members from GNCJ will kick off the event with a presentation of their demands and priorities created in response to the rezoning proposal. A panel discussion following will touch upon the historic roots of current environmental and housing issues in Gowanus as well as sustainable and just alternatives to top-down urban planning approaches.