if a song could be freedom mixtape 017 – Military Dissent 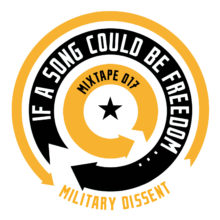 Military Dissent – Mixtape 017 was put together and produced by Kevin Basl, a writer and musician living near Ithaca, NY. He is a member of About Face (formerly Iraq Veterans Against the War) and Veterans for Peace.

“The music on this mixtape was inspired by those antiwar dissenters who know the inner-workings of the U.S. military best. Most of the songs were written and/or performed by veterans or service members. Vietnam Veterans Against the War, Iraq Veterans Against the War (now “About Face”) and the G.I. resistance movements of the past half-century produced the countercultures from which this music emerged. Not surprisingly, most can be categorized as punk, folk, blues or rap–the music of the People–with lyrical content ranging from remorseful warnings to potential enlistees, to revolutionary convictions, to gallows humor. This mixtape also includes clips from interviews, public testimonies, street actions and other media, providing context for the songs. This is just a sampling of a well-stocked, but under-appreciated, subgenre of antiwar music.” -Kevin Basl