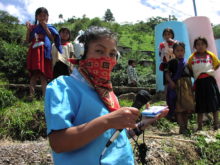 September 29 will be the final day to view our current exhibition, Resistance Radio: The People’s Airwaves, which looks at the history of radio as a medium for grassroots movements and their organizing work.  Join us for a closing party and film screening, as we show a series of short films related to some of the stations and movements included in the exhibition.  Films will include:

Radio Insurgente: La Voz de los Sin Voz  (Director: James Price, 2003, 13 mins): This film covers the establishment of the Zapatista’s radio station, autonomous like the communities it serves – the voice of the voiceless. Filmed during late 2002, this film is a segment of a still as yet unrealised portrait of the region and its conflicts, and was premiered in the main square of St.Cristobal on the 1st January 2004, as the masked Zapatistas once again took over the city, to commemorate the 10th anniversary of their uprising.

Bush Radio, Partial Eclipse (Director: Richard Wicksteed, 1993, 35 mins): This film is about the struggle to establish a community radio station in Capetown in the early 1990s.

Steal This Radio (Produced by Paper Tiger, 1996, 5 mins): This is an excerpt from a Paper Tiger documentary, “No Carrier: Accessing the Telecom Act of 1996″, focused on Steal This Radio, an unlicensed community station based in an illegal squat. Digitized video courtesy of Rachell Daniell.

How to Build a 10 Watt FM Transmitter and Station (Produced by Transit Antenna, Stephen Dunifer, and Free Radio Berkeley, 13 mins): This video guides you through the steps of building a 10 watt FM broadcast transmitter and provides an overview of what is required to set up an FM broadcast station.