Three Dead Anarchists of Philadelphia, and Why I stalk Them: a talk about the place of local history in today’s struggle 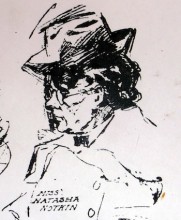 For over 25 years, Robert Helms has researched anarchism’s “golden age” in Philadelphia. Working as an independent scholar, Helms has uncovered nearly all of what is known about two leading women anarchists who were active between 1889 and 1917, Natasha Notkin and Mary Hansen, and many important facts and texts by the well-known anarchist public intellectual Voltairine de Cleyre. Helms’ talk will describe the major events and activities of the anarchist milieu in Philadelphia during this period. Focusing on the lifetime commitments and sacrifices made for the cause by these three women, and how their personalities and the circumstances of their lives informed their radicalism, Helms will address the question of why local historical research is critical to our struggles to create a just and happy world.

He will discuss his methodology for conducting research, as well as the intense thrill a researcher has when they are the only person on earth who knows an amazing, true story of long-dead anarchists. We hope this event will spark discussion about how people can conduct this kind of research in their own communities, the best ways to share the histories and generate future workshops on research in the New York area.

In addition to many articles on anarchism, labor activism, and his zine Guinea Pig Zero (1996-2000) Helms’ published work includes: Guinea Pig Zero: an anthology of the journal for human research subjects (2002); George Brown, The Cobbler Anarchist of Philadelphia (2006); Editor & researcher, Forty Years In The Struggle: Memoirs of a Jewish Anarchist by Chaim Leib Weinberg (2007).