Originally posted on the Ace Hotel blog at http://blog.acehotel.com/post/136142026373/in-these-united-states-weve-used-unspeakable
In these United States, we’ve used unspeakable systemic violence to create a supremacist culture that has and continues to rob black people of freedom. Here, we don’t need to speak the unspeakable. We see it every single day, all of us. But there are people who fight for power, which is to say agency, which is to say freedom. It takes art and passion and standing up next to each another. The tide-buckers and the oppressed have been for centuries fighting tirelessly for the dignity and equality of their own bodies, lives, loves. The political rhetoric in this fight has lately taken to social media, an outlet wholly democratic for other voices to be heard and social awareness to bloom.
Forty years ago though, it took place in part on the covers of paperback books. The sale of these books — 99 cents in pharmacies and grocery lines across America — helped shape contemporary discourse and design. Stokely Carmichael and Charles Hamilton’s Black Power can be examined as an example of one such publication. 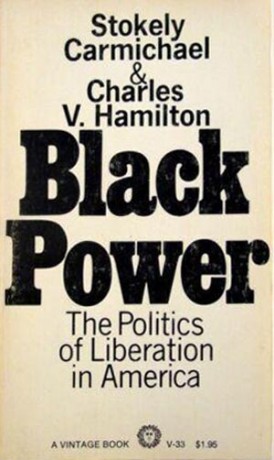 The original design by Larry Ratzkin is unassuming yet profound: a white field, with the giant words “Black Power” centered in a thick, slab-serifed type. No images, no frills. The efficiency of the cover appears so natural that any other is hard to imagine; the design has come to embody the political moment in the late 1960s when Black people began uniting in their struggle for liberation. Other variations, iterations and representations of the movement and the paperback below, originally on view in the gallery annex at Ace Hotel New York.
This selection was curated by the Interference Archive — a Gowanus, Brooklyn-based archive exploring the relationship between cultural production and social movements, and working to preserve the history of movements in an environment that allows marginalized communities to shape the way their own history is represented.