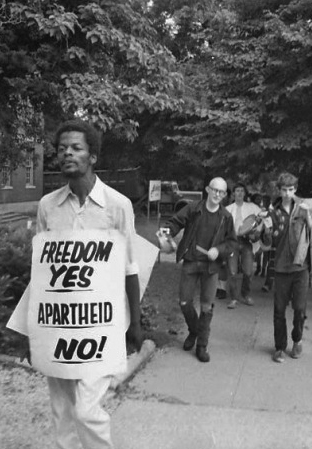 Interference Archive is proud to be part of the exhibition Activation, at the Silent Barn in Bushwick, Brooklyn.
Opening Tuesday, January 29, 2013, Activation is an exhibition of photographs and ephemera exploring the intersections between the underground punk-rock and radical leftist political movements in 1980s’ Washington, DC.
Featuring the work of Bert Queiroz whose photography captured the DC Hardcore scene (DCxHC) at its apex, Activation asks and explores how cultural production and political action can do more than work together, but also become one and the same.
Contextualized with ephemera on loan from Interference Archive, Activation focuses on the mid to late1980s when punk rock had arrived on the international stage and its players had come of age in the Nixon-Reagan years. Reacting to a tide of political and cultural conservatism, DCxHC sought to affect change both at home and abroad. Organizing innumerable benefit shows for local non-profits as well as participating in actions against such international issues as apartheid and the CIA led incursions in South and Central America, DCxHC catalyzed a dialog within the larger punk-rock movement of social progress through art.
Bert Queiroz is a photographer and musician based in Brooklyn, NY. Originally from Washington, DC, Bert was one of the original members of the punk & hardcore scene that gave birth to such influential bands as Minor Threat, Bad Brains, and Fugazi. Bert has also been the bass player in The Untouchables, (DC) Youth Brigade, Double-O, Second Wind, Meatmen, Rain, Manifesto, and Thunderball. In between all this music making, Bert was also budding photographer documenting the people and bands around him.
Special thanks to Interference Archive, a collectively run organization that explores the relationship between cultural production and social movements through public exhibitions, a study and social center, talks, screenings, publications, workshops, and an online presence. Through its programming, Interference uses cultural ephemera to animate histories of people mobilizing for social transformation.
Facebook invite: http://www.facebook.com/events/116869668485055/