Advocacy On-Air: Transcript of a Discussion on Radio Activism 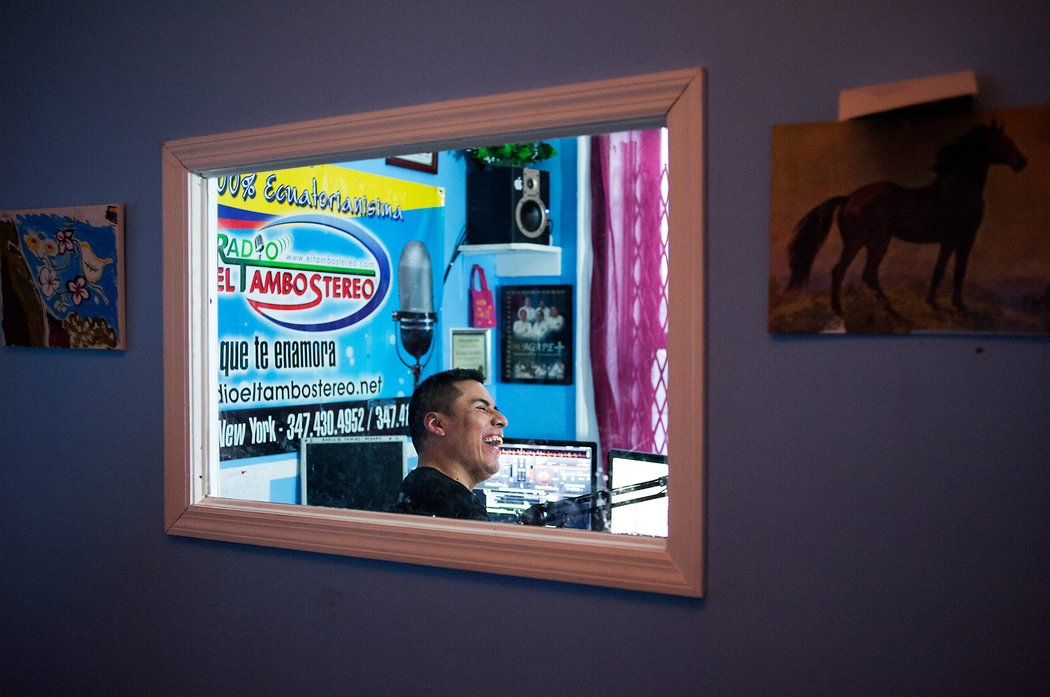 Audio Interference – the biweekly podcast produced by Interference Archive – launched its third season in October 2017. To mark the occasion, we hosted Advocacy On-Air, a panel discussion on the use of radio as a political medium and a community building tool.  The event took place on October 16, 2017 at Starr Bar in Bushwick, and speakers included Sylvia Ryerson, of Appalshop’s Calls from Home, Fabian Muenala Pineda, of Kichwa Hatari New York, and Naomi Brussel of Out-FM.  The panel was moderated by Rob Smith, Interference Archive volunteer and one of the creators of Audio Interference.  Marian Quequena acted as a translator for Fabian Muenala Pineda.
Rob Smith: I’m one of the volunteers at Interference Archive, and I will be playing moderator tonight. Joining me are, from your left to right, Sylvia Ryerson from Appalshop and WMMT’s Calls from Home, Fabian Muenala Pineda and Marian Quequena, who will be helping to translate, from Kichwa Hatari NY, and at the end we have Naomi Brussel from Out-FM. I’m going to turn it over to them to introduce themselves and play clips from their shows. They’ll just describe their programs and say a bit about themselves and then we’ll intro a clip.
Sylvia Ryerson: Hey everyone, really excited to be here tonight and hear about these great projects up here too. My name is Sylvia and I’m currently working on a project called Restorative Radio, where I work with families here in New York City that have relatives incarcerated far from home in rural upstate New York, to make postcards from home. So we make short five to ten minute radio pieces, a sort of soundscape of home, that is then broadcast on local radio stations to reach their loved ones in prison. And, in picking clips to share tonight, I wanted to go back a little bit further, into how I got started on this project, which was about ten years ago. I worked in a rural radio station in the heart of coal country in Appalachia, and hosted a weekly radio show, that was a call-in show for families that had people in prison, one of the facilities within the local broadcast area. Here’s just a little clip I’ll play of what this radio show sounds like and on the theme of radio activism: the show is just a regular two hour call in show, people phone in from all across the country, from California, Florida, Maine, to this teeny station in Kentucky, and just sort of give updates on daily life and whatever they want to share. But in that, often the political work happening against mass incarceration emerges, and on one night, I was hosting the show, and there was a hunger strike happening at one of the state prisons. And my fellow co-hosts and I had reached out to folks across the country, from folks in Critical Resistance in California, and other solidarity groups, to call into the radio show to get messages of support out to the men on strike. So this is what the show sounded like that night.
[Note–we cannot share the clip from the night of the hunger strike, but we have included an example of Calls From Home below.]

SR: And we got a letter at the radio station a week after that show aired. One of the strike leaders was a young man named Pierre, and by the point that that radio show had broadcast, the prison officials were trying to break up the strike, and so separated everyone they thought was involved and put them in isolated cell blocks in total segregation. And so Pierre, at that point, had had zero contact with anyone on the outside, any of his fellow organizers on the inside, for a week. But he still had access to his radio, and he tuned in and heard those messages. And he wrote us and he said listening to those messages that night, I felt like I wasn’t alone. I felt like I was a human being. And so through hosting that show for many years, it became a political tool in different ways. We worked to organize van trips to help families come visit these very remote prisons and communicate the latest news in the criminal justice system and just try to keep families connected. So that project led me to my current work, which, hosting the show, I sort of was thinking about how amazing this medium of radio is, to kind of people specifically in prison, and so I wanted to play a little clip, where I actually work with families in their own communities to make a little radio piece of whatever they want to share from home. So this is a piece, I worked with a women, Essie Manns, who made a beautiful radio piece for her grandson DeVaughn, who is serving a 25 year sentence very far from home. So here’s just the beginning.

SR: So that’s just the first three minutes of Essie’s piece. We ate at her home, had dinner with her whole extended family, and shared memories of DeVaughn as a child and talked about their hopes and dreams for his future. So I’m excited to talk more about it and how it relates to the great work that you guys are doing.
Fabian Muenala Pineda [translated by Marian Quequena]: Good night everyone. I want to thank you for the invitation and I want to thank you guys for coming here. I want to share a little more about our experience in radio. First of all, I want to say that Kichwa is a language in danger of extinction, according to the United Nations. We consider of all the population in the United States that is Kichwa, it’s 40% of the Ecuadorian population. The population Kichwa in New York in this area, it’s very important. But we haven’t been visible. Maybe it’s because, when we get to this country, we lose our identity. We’re just seen as the Latin American people and we lose our culture and our roots. We lose our identity as Kichwas, as Ecuadorians, and see ourselves as Latin American people.
The program started three years ago. I think it’s really important, the visibility of our community, and our program. When we first started, we didn’t think that the community would accept us. This project started just as an idea. For us the welcoming of the community has been very important. We have been going not just on the radio, but we have different programs besides the radio. At this point, the radio has been a really good tool to interact with the community, to get to know the community. The radio is really important. It lets us know the community and work with the community, and also have that engagement with them. The reaction from the community has been really good, really high.
We have been reaching our kids with programs to share with them; to bring them back to our roots and traditions as an indigenous people. I think it’s really important, the concepts, the structure that we have. We are working on specific structure. Everything we’re doing, everything we’re working for is gonna help us. Our children, the future, to bring them back to our culture and our roots.
Before this program, Kichwa Hatari, came out our people were limited by the available media. It’s because our community was listening to programs like FM and they were listening to music like Bachata, Merengue, Rock. They didn’t have any programs to reach their traditional community and culture. Our teenagers were identifying with that. There’s nothing wrong or bad with that, but I think that bringing back the teenagers to our traditions is really important. This program helps us identify and be proud of our culture and our language. We have a lot of people coming to the radio station saying that they don’t even speak Kichwa or saying “I just want to say hi” or say a short sentence in Kichwa. By the end of this discussion, they ended up feeling more comfortable and feeling good about themselves and they ended up speaking in Kichwa for the whole conversation.
The radio program helps us identify and communicate with different indigenous communities. This is how we identify the different groups of identify the different groups of indigenous people that come from Ecuador. This is how we’ve been identifying the 40% of our community that comes from indigenous backgrounds or are indigenous.
I think we have audio from our program, and after that we’ll speak a little bit in Kichwa and speak about our experience. We also had a Television program called Kichwa Hatari TV. It was really positive but it was impossible to continue because of the time required, and the demands of everyone’s personal lives. We also have Kichwa classes. We have Kichwa classes through the radio but it’s hard to see the improvement of the people who are taking the class or just listening through the radio. We also talk about Kichwa philosophy, indigenous philosophy. Because this is important to know where we come from, who we are, and where we are from. We also have community programs. We help the community. We help other organizations to become stronger.
Now we will listen to the audio.
[Note: The excerpts played during the event were from minutes 7:17-8:42 and then from 9:50-13:04.]