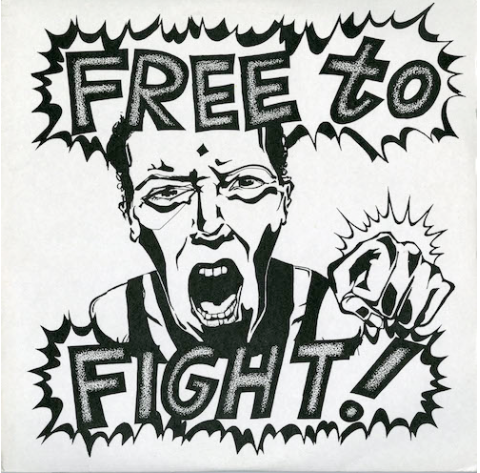 Take Back the Fight Tells the History of Fighting Gender + Sexual Violence through Activist Design
Words by Madeleine Morley
Published on July 26th, 2017 (originally published here)
Questions of state and social attitudes towards gender and sexual violence have recently attracted widespread attention, spurred by everything from the attacks on women in Cologne early last year to the public outrage following the results of the Brock Turner case. It’s within this context that New York’s archive of protest, the Interference Archive, stages Take Back The Fight: Resisting Sexual Violence from the Ground Up, an exhibition focusing on responses to gender and sexual violence, told through printed ephemera.
It’s an exhibition that continues the Interference Archive’s mission of exploring the relationship between cultural production and social movements through a close look at the archive’s collection of posters, flyers, publications, and other materials of cultural ephemera and graphic design.
A collaboration with Lesbian Herstory Archives, Take Back the Fight is divided into various categories of community-based organizing, from 1970s feminism, to queer anti-violence activism, transgender anti-violence activism, to Riot Grrrl. It also includes a section of zines about consent and accountability; pamphlets with names like Asshole! and Let’s Talk.
There’s a section on campus activism that includes posters emerging out of Take Back the Night and photographs from the ‘20 Minutes of Action’ performance that took place at Stanford as a response to the Brock Turner case. Within a Social Media section, there is an iPad for visitors too look up hashtags and learn more about the context of online mobilization, and in a Self-Defense section, there are a number of instructional pamphlets like The Lesbian Anti-Rape Packet and The Women’s Guide to Guns.
One of the zines on display is Rocket Queen, a ‘perzine’ (personal zine) published during the early 2000s recounting the author Janet’s tales of working as a dancer in Asheville, NC. Rooted in the sex-positive feminism coming out of the feminist sex wars of the ‘80s (a period to which the exhibition also dedicates a section), Janet’s zine considers why someone would want to dance for money by looking at her own motivations for doing so. It considers ideas of freedom, power, and attention, and is tied together with hand-scrawled lettering that emphasizes the personal voice behind the publication.
Also on display is Discharge, a zine created by Mary Fondriest, a collaborator of Mary Summer and Erika Reinstein of Riot Grrrl Press. Its aesthetic falls into that of the Riot Grrrl period, but its stories of surviving sexual violence create a second context for the cut-and-paste style. The chopped-together graphics reflect the process of taking fractured and fragmented parts and stitching them together again to make a whole, visually enacting the process of mending.
Stitching and the process of “putting together again” is a recurring motif throughout the exhibition: also on display are a number of quilts from activist art project The Monument Quilt, a continually evolving collection of embroidered stories stitched by survivors of rape and abuse. From the Riot Grrrl period, the Interference Archive also showcases Free to Fight, a double album and booklet released by Candy Ass Records in 1995, subtitled “an interactive self-defense project.” The piece brings together recordings of all-women bands alongside self-defense instructions and personal testimonies.
Two of the exhibition’s five curators, Louise Barry and Monica Johnson, point out that while some of the graphics veer towards the counter-aggressive, there’s also a tendency within the context of publications about sexual assault for the graphic design to be neutral, quiet, and almost invisible. This is the case especially for works that address victims; the function is therefore a protective one.
“There are a lot of works, especially during the ‘80s, that are more discreet, and which don’t identify visually as being about violence or something female-centric,” say Barry and Johnson. “These examples don’t identify personhood either; they are almost anaemic and stripped back.” They cite the Handbook for Beaten Women, produced by the New York State Department of Social Services in 1984 as an example. “It’s likely that these publications were designed in this way so that they could exist in camouflage; a woman could put it discreetly into her handbag and it wouldn’t be noticed, which is especially important if she was still in a violent situation at home or elsewhere.”
The combination of works of print that are loud and counter-aggressive, and works that are quiet and neutral, signifies a prevalent tension in the history of activism—how to visualize an issue without re-visualizing the violence of it. The work displayed at Interference Archive shows various techniques that individuals have used to navigate the problem of communicating violence without creating violence porn. It also demonstrates how expressing anger visually has been an important way of supporting an appropriate response to sexual assault, therefore emphasizing that there is a place for all kinds of graphics, angles, and visual tactics within organizing.
Whatever the tactic, ultimately, Take Back the Fight is a collection of creative responses of support, and an exhibition that highlights how the creative act of printing and publishing itself has played a vital role in individual and collective healing. By showcasing such a diverse range of responses, it situates feminist resistance to violence as a collective struggle rather than a personal and internalized experience. Its own graphic is simple in the way that it represents mending and growing in numbers: it uses a green and blue color palette to represent the sky and the organic realm, denoting healing, growth, and strength.