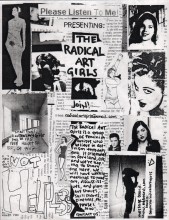 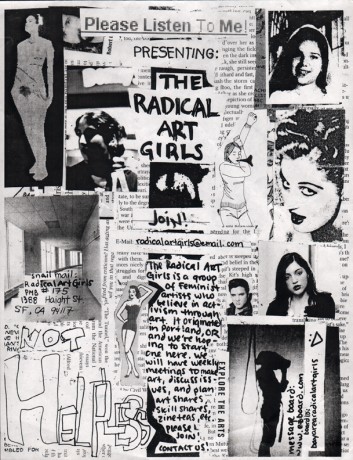 Interference Archive is proud to have lent materials to be included in the exhibition Alien She, at the Miller Gallery, Carnegie Mellon University, Pittsburgh.

ABOUT THE EXHIBITION
Alien She is the first exhibition to examine the lasting impact of Riot Grrrl on artists and cultural producers working today. A pioneering punk feminist movement that emerged in the early 1990s, Riot Grrrl has had a pivotal influence, inspiring many around the world to pursue socially and politically progressive careers as artists, activists, authors and educators. Emphasizing female and youth empowerment, collaborative organization, creative resistance and DIY ethics, Riot Grrrl helped a new generation to become active feminists and create their own culture and communities that reflect their values and experiences, in contrast to mainstream conventions and expectations.

Riot Grrrl formed in reaction to pervasive and violent sexism, racism and homophobia in the punk music scene and in the culture at large. Its participants adapted strategies from earlier queer and punk feminisms and ‘70s radical politics, while also popularizing discussions of identity politics occurring within academia, but in a language that spoke to a younger generation. This self-organized network made up of teenagers and twenty-somethings reached one another through various platforms, such as letters, zines, local meetings, regional conferences, homemade videos, and later, chat rooms, listservs and message boards. The movement eventually spread worldwide, with chapters opening in at least 29 states and 21 countries.* Its ethos and aesthetics have survived well past its initial period in the ‘90s, with many new chapters forming in recent years. Riot Grrrl’s influence on contemporary global culture is increasingly evident – from the Russian collective Pussy Riot’s protest against corrupt government-church relations to the popular teen website Rookie and the launch of Girls Rock Camps and Ladyfest music and art festivals around the world.
Alien She focuses on seven people whose visual art practices were informed by their contact with Riot Grrrl. Many of them work in multiple disciplines, such as sculpture, installation, video, documentary film, photography, drawing, printmaking, new media, social practice, curation, music, writing and performance – a reflection of the movement’s artistic diversity and mutability. Each artist is represented by several projects from the last 20 years, including new and rarely seen works, providing an insight into the development of their creative practices and individual trajectories.
In various ways, these artists have incorporated, expanded upon, or reacted to Riot Grrrl’s ideology, tactics and aesthetics. For instance, many continue to cultivate and nurture alternative communities. Ginger Brooks Takahashi creates spaces for conversation and exchange with jubilant publications, dance parties, mobile reading rooms and soup delivery service. Through photography and video, Faythe Levine documents groups committed to DIY independence and handmade aesthetics, such as crafters, off-the-gridders, and, in her new book and documentary, traditional hand-lettered sign painters. L.J. Roberts fabricates declarations of protest and solidarity with evocative banners and textile works.
Riot Grrrl thrived through the establishment of DIY networks and information sharing, an aspect manifest in Stephanie Syjuco’s project for freely distributing copyrighted critical texts and in Miranda July’s video chainletter for “lady moviemakers.” Recalling forgotten her/histories was also central to Riot Grrrl, and in that vein, Allyson Mitchell pays homage to key writings, feminist presses, bookstores and libraries with lesbian feminist library wallpaper, while Tammy Rae Carland reveals intimate relationships in her autobiographical photo series. All of the artists included here have worked collaboratively and many have built platforms for other artists and under-recognized groups to connect, encourage, share resources and self-publish.

The exhibition’s historical section is designed to be plural and open-ended; this is a living history, not a sealed past. By representing numerous voices and experiences, rather than outlining one single definitive story, we hope it will reflect the multiplicity that was such an integral part of the original movement. Toward this end, a sampling of the Riot Grrrl movement’s vast creative output is included here. Hundreds of self-published zines and hand-designed posters were solicited from institutional and personal archives through open calls, word-of-mouth and invitations – similar to the way Riot Grrrl expanded. Music playlists represent different Riot Grrrl scenes across the U.S., Canada, South America and Europe, guest curated by musicians, DJs and label owners, and accompanied by records, cassettes, set lists, band T-shirts and other ephemera. Video interviews and an ongoing, online Riot Grrrl Census provide an expanded oral history.
The exhibition’s title, Alien She, is a reference to a Bikini Kill song of the same name. The lyrics are about the negotiation of normalized gender roles, the uneasy line between feminist critique and collectivity, and the process of coming to a feminist consciousness, with the repeated refrain, “She is me, I am her.” More broadly, Alien She conjures the possibilities of identity, self-determination and subversion. In the face of alienation and bigotry, Riot Grrrl fostered community, action and creation. This exhibition provides a view into the passion and diversity of the original Riot Grrrl movement, and highlights how these ideas have broadened, evolved and mutated in the work of contemporary artists.