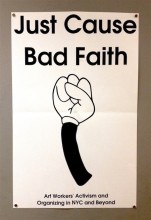 In Favor of the Collective: “Just Cause : Bad Faith”

This article originally appeared at http://art-handler.com/magazine/in-favor-of-the-collective-just-cause-bad-faith?nosplash=true

The apron-clad January calendar model reclines seductively on the surface of a table saw, safety glasses nonchalantly perched on top of their head—OSHA be damned. “That’s the Freelance Art Handlers Calendar,” explained exhibition co-organizer Stephen Sewell, “It all started because xxxxxxxx excluded art handlers from their holiday party, so they decided to raise funds to throw their own.” [1]

This past December, Interference Archive, in collaboration with Art Handler’s Alliance of New York (AHA-NY) hosted “Just Cause : Bad Faith – Art Workers Activism and Organizing in NYC and Beyond,”[2] an exhibition of artworks, documents, and ephemera surrounding the organizing efforts of cultural workers, past and present. Part history lesson, part art show, the gallery contained archival materials sketching a rough timeline of art worker activism in New York, as well as some recent artworks addressing the current conditions of labor in the art market.

A timeline wrapping around the gallery wall chronicled the history of arts activism from the Works Progress Era to present, with archival issues of Art Front Magazine (1934-37) in a vitrine below. One wall was dedicated to the Sotheby’s lockout of the unions in 2012, and Antonio Serna’s project “Documents of Resistance” details the contributions of artists of color to arts activism. A selection of reading materials from various activist groups was available in the reading room for anyone who wanted to dig deeper. Works such as Clynton Lowry’s Custom Moving Blanket Jacket (2013), the aforementioned New York City Freelance Art Handlers Calendar, and Shane Caffrey’s Art Handlers Olympics (2009-14) bring the exhibition into the present and provide some humor, while critiquing the often under-appreciated nature of their jobs.

The exhibition’s stated goal was to provide a “‘how-to’ for present day cultural workers” by emphasizing “the moments when collective action has been taken, and when artists have recognized their jobs as not just a way of supporting their art practices, but as a subject to be critically examined and possibly improved by their art.”

I think that this distinction, shifting the focus from the individual creator to the collective, is crucial to the success of the exhibition. The archival documents and texts in the reading room provide context for the current relationship between art workers and employers, and the art featured is a means to an end (better working conditions), rather than a product in and of itself.

As an example, a 2012 exhibition at David Zwirner, titled “People Who Work Here,”[3] provides a model for a show celebrating the individual output of art workers. The summer group show featured the work of over a dozen of the gallery’s employees—a smorgasbord of emerging artists—with the stated goal of bridging the emerging and established gallery scenes, “testifying to the interconnectedness of the New York art world and the relationships that exist between new and established artists and galleries in Brooklyn and Manhattan.”[4] In contrast to the ‘here-and-now’ focus of “Just Cause,” PWWH models the speculative nature of the contemporary art market.

PWWH showcased the works of the artists with little link between their content other than their employment. By placing labor in the title of an exhibition from which it was thematically absent, the gallery pays lip service to a democratic, populist appeal. Though sales of works may benefit the exhibited artists in the short term, the gallery can enjoy long-term benefits to its image. Through this exhibition, the gallery places itself in somewhat of a paternal relationship with the artists, in that they know how to “discover” a staff of talented artists who will benefit from their tutelage and the connections they provide.[5] Value is conferred on the works by the artists’ proximity to artistic “genius”—both physical (through labor), and temporal (they’re up and coming artists!)—in the hopes that one of them may someday be propelled to superstardom. The gallery dangles the golden carrot of artistic success, enticing artists to work for deferred benefit and encouraging speculation on the part of collectors.

This structure is part-and-parcel of the neoliberal mindset, in which exceptional individuals will rise to the top through hard work, and those who remain at the bottom are there by personal fault. It’s the same mechanism by which the working class might support tax cuts for the rich in the hopes that they, too, might someday strike it rich. It is not surprising that a show at a commercial gallery would replicate this structure, whereas the exhibition at Interference Archive offers an alternative to playing the lottery, shifting its focus instead to the present conditions of labor within the art market.

Only 15 percent of artists in New York City make a living strictly from their work, and with a meager median income of $25,000 per year,[6] an even smaller percentage earns a solid living wage this way.[7] The fact is that most artists will never be able to rely on their work as a primary source of income. The prescription offered by “Just Cause” is clear—we need to start thinking of art handling as a skilled profession and a career path like any other trade, rather than as a temporary position one holds until they make it or drop out.[8] While a group show can be beneficial for an artist’s exposure, it is imminently important to focus on the realities of the everyday and for arts workers to claim agency in their present situations.

While the exhibition at Interference Archive did an excellent job of describing the current stakes and efforts of art handlers to organize, there was one work that pointed to a deficit in and possible future direction for AHA’s organizing efforts. In Jo Ann Balcean’s work Job Titles by Rank and Alphabetical Order. Version 2. (2015), two large sheets of paper listed staff positions culled from a variety of museums and galleries, one in order of hierarchy, the other in alphabetical order. A red felt tip pen was provided so that viewers could make additions or edits to the hierarchy as they saw fit.

At the opening alone, I observed a high level of interaction with Job Titles—people spent a good amount of time with it, and there were multiple arrows, scribbles, and insertions within the first the first couple of hours. I think that this is because a community beyond strictly art handling could identify themselves in the work, mentally reviewing workplace stresses and frustrations as they evaluate and edit the power rankings based on their own experiences. Art workers who fill jobs in administration and visitor services, volunteer docents and underpaid fellows, all have a stake in this issue and could form a powerful coalition with art handlers.

I also think it’s important to point out the gender disparities between different types of workers in the arts. A quick glance at Local 814’s website shows an overwhelmingly male membership, and though there are more women in art handling, AHA’s membership is still predominantly male. Anyone who’s worked at an arts organization can tell you that the workforce in arts administration is dominated by women, though men still outpace them in executive roles.[9] Women benefit immensely from union membership in all sectors, which has the effect of cutting in half the gender pay gap.[10] Unionization is not just a labor issue but a feminist issue as well and AHA would do well to reach out to the scores of women who populate other sectors of the culture industry.

To this point, Art Handler organized the Art Handling Symposium[11] at ALLGOLD MoMA PS1 last year, with a panel bringing together activists from Arts and Labor, W.A.G.E., and AHA-NY to discuss how these different factions might work together, and they plan to hold another such conference in the spring. All told, the difficulties of organizing such a diverse field are many, and “Just Cause” doesn’t claim to have all the answers—but in mapping the efforts of arts activists in New York, it provides a foundation from which we can start.

Footnotes:
1
While it began as a tongue-in-cheek joke among coworkers, the calendar proved to be wildly popular, selling out its run. Organizers put out a second calendar in 2016, donating proceeds to charity. The fact that I am not authorized to name the employer is also illustrative of the precarity of non-union contract labor.
2
“Just Cause : Bad Faith – Art Workers Activism and Organizing in NYC and Beyond” was on view at Interference Archive December 3–31, 2015. The exhibition was organized by Stephen Sewell, Roberts Smith, and James Whitman as a collaboration between AHA-NY and Interference Archive.
3
Following the submission of this article, a second edition of “People Who Work Here” was presented at Zwirner with a similar framework. For the purposes of this article, they are basically interchangeable, though the 2016 exhibition did not make the same claims to “bridge the emerging and established gallery scenes.”
4
This is not intended as a criticism of any of the artists or works in the show or even of the specific compensation/employment policies of the gallery (which I am not privy to), but rather as an examination of how this framing functions, particularly within the context of a mega-gallery like Zwirner.
5
Not to mention our culture’s obsession with youth and novelty, and the caché awarded to one who is in the know about the ‘next big thing.’
6
BFAMFAPhD, accessed April 25, 2016.
7
Based on MIT’s Living Wage Calculator, a living wage for an individual with no children in the New York Metropolitan area is $28,523 before taxes (about $25K after), meaning that at least half of that 15 percent of working artists in New York City do not make a living wage. Dr. Amy K. Glasmeier, “Living Wage Calculator,” Massachusetts Institute of Technology, 2004-2016. Accessed April 27, 2016.
8
Also see this interview between DIS editor-at-large Arthur Wuurlde and artist/arts worker Barbara Enyce for a cogent description of this situation—Barbara Enyce, interview by Arthur Wuurlde, edited by Rose Marcus, “Middle Class’s Plain Vanilla,” DIS Magazine, accessed April 25, 2016.
9
Though female directors have caught up to men in smaller institutions, they only represent 24 percent of directors in large museums and earn 71 cents to the dollar earned by men in the same position. Christine Anagos, Anne Marie Gan, Zannie Giraud Voss, Lisa Phillips, Allison D. Wade, “The Gender Gap in Art Museum Directorships,” Association of Art Museum Directors, March 7, 2014.
10
“Gender Wage Gap is 40 Percent Smaller Than for Non-Union Workers, NWLC Analysis Shows,” National Women’s Law Center, January 23, 2015.
11
Art Handler’s Art Handling Symposium