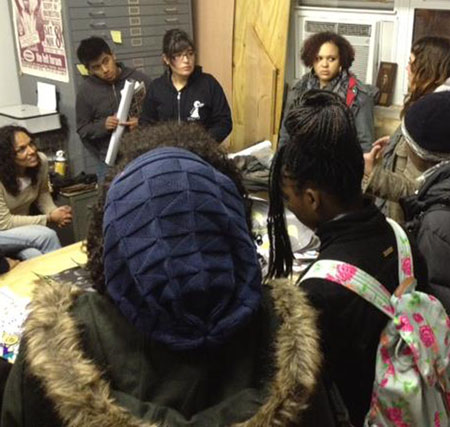 On November 14, 2012, Interference Archive hosted a group of Brooklyn youths at the request of their mentors with the Groundswell project. It was as part of these teens’ learning and research for a mural they’ll be creating in spring 2013 at the Navy Yard related to notions of “work.” The mentors asked an archive collective member, Cindy Milstein, and members of Sublevarte Colectivo, visiting from Mexico to install a retrospective at Interference covering thirteen years of their work, to speak to the youths about their experiences in the anticapitalist uprisings in North American around 1999 through the early 2000s. Here’s a report back from Cindy:
Just as over a half-dozen Sublevarte Colectivo members were balancing on ladders and tiptoes to cover a wall with a massive “stenciled wallpaper” for their upcoming The Persistence of Dreams exhibition, opening this Friday, some twenty youths and their two Groundswell mentors crammed into the archive’s increasingly too-small space. After I briefly explained the archive to them and talked a bit about forms of self-organization, ranging from affinity groups to anarchism, I mentioned that they could peek into any part of the open stacks as inspiration for their Navy Yard mural project. The space was suddenly filled with activity, chatter, and enthusiasm, which only increased when they found a huge bag of hundreds of political buttons. A few of the youths asked if they could dump the pins on the table, and as soon as “yes” came out of my mouth, the group swarmed around the pile, interrupting each other to share slogans and images from the buttons. Their eagerness went up another notch when I set piles of RadioActivity “Nuclear North America” maps from the last Interference exhibition, Institute for Anarchist Studies’ Lexicon pamphlets, and Occuprint’s May Day Strike posters/newspapers on the table, and said, “These are free!” The Groundswell teens flipped through everything from books on social movements to Celebrate Peoples’ History posters.
But the best part of their visit was when two members of Sublevarte Colectivo spoke to the Groundswell crew in English and Spanish (with one of the youths translating) about the Zapatistas, their own collective process, how they had engaged in social struggle, and the 1999-2000 Mexican student strike. They explained to the teens that they had, for instance, spent hours on public buses in Mexico City to do education and outreach about the strike, passing out posters and flyers that they’d made, and later, after generating widespread support, collecting materials for the striking students in return. One Sublevarte member mentioned how much the Zapatistas had changed her way of thinking, saying that she had previously thought of democracy as “fifty-plus-one” to make decisions, but learned about a politics of listening, obeying by following, dignity, solidarity/accompaniment, and deciding together. Toward the end of what was a lovely explication, one of the youths said, “I moved here from Mexico four years ago and I never heard about this strike.” She eagerly wrote down the date “November 26,” when Sublevarte will show a film on the strike at the archive and talk further about their experiences with it. It was clear that hearing about “art & revolt” from Sublevarte thoroughly inspired these teenagers, about to make their own rebellious art in Brooklyn at an age only a couple years younger than when Sublevarte started out thirteen years ago.
For more on Groundswell, see http://www.groundswellmural.org/