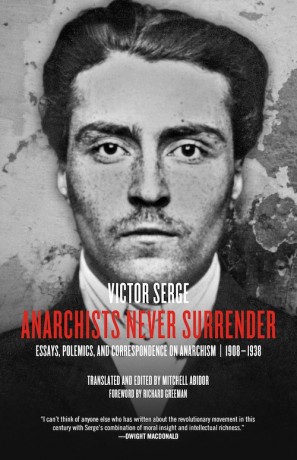 Anarchists Never Surrender provides a complete picture of Victor Serge’s relationship to anarchism. The volume contains writings going back to his teenage years in Brussels, where he became influenced by the doctrine of individualist anarchism. At the heart of the anthology are key articles written soon after his arrival in Paris in 1909, when he became editor of the newspaper l’anarchie. In these articles Serge develops and debates his own radical thoughts, arguing the futility of mass action and embracing “illegalism.” Serge’s involvement with the notorious French group of anarchist armed robbers, the Bonnot Gang, landed him in prison for the first time in 1912. Anarchists Never Surrender includes both his prison correspondence with his anarchist comrade Émile Armand and articles written immediately after his release.

The book also includes several articles and letters written by Serge after he had left anarchism behind and joined the Russian Bolsheviks in 1919. Here Serge analyzed anarchism and the ways in which he hoped anarchism would leaven the harshness and dictatorial tendencies of Bolshevism. Included here are writings on anarchist theory and history, Bakunin, the Spanish revolution, and the Kronstadt uprising.

Anarchists Never Surrender anthologizes Victor Serge’s previously unavailable texts on anarchism and fleshes out the portrait of this brilliant writer and thinker, a man I.F. Stone called one of the “moral figures of our time.”

“One of the most compelling of twentieth-century ethical and literary heroes.”
—Susan Sontag

“I can’t think of anyone else who has written about the revolutionary movement in this century with Serge’s combination of moral insight and intellectual richness.”
—Dwight Macdonald

“To me he has seemed a model of the independent intellectual in Europe between the wars: leftist but not dogmatic, political yet deeply involved with issues of cultural life, and a novelist of very considerable powers.”
—Irving Howe

“I believe indeed that to rescue the humanist tradition of the last decades is of the utmost importance, and that Victor Serge is one of the outstanding personalities representing the socialist aspect of humanism.”
—Erich Fromm

“Victor Serge died in exile and obscurity, apparently no more than a splinter of a splinter in the Marxist movement. But with the passage of the years, he looms up as one of the great moral figures of our time, an artist of such integrity and a revolutionary of such purity as to overshadow those who achieved fame and power. His failure was his success. I know of no participant in Russia’s revolution and Spain’s agonies who more deserves the attention of our concerned youth.”
—I.F. Stone

“I know of no other writer with whom Serge can be very usefully compared. The essence of the man and his books is to be found in his attitude toward the truth. . . . His life and its choices demonstrate an exemplary truth to which he was prophetically sensitive and which we should now accept as axiomatic. Institutions can be defended by lies, revolutions never.”
—John Berger, New Society

Victor Serge (1890–1947) was born to Russian anti-Tsarist exiles living in Brussels. As a young anarchist firebrand, Victor was sentenced to five years in a French penitentiary in 1912. In 1919, Serge joined the Bolsheviks. An outspoken critic of Stalin, Serge was expelled from the Party and arrested in 1929. Nonetheless, he managed to complete three novels (Men in Prison, Birth of Our Power, and Conquered City) and a history (Year One of the Russian Revolution), published in Paris. Arrested again in Russia and deported to Central Asia in 1933, he was allowed to leave the USSR in 1936 after international protests by militants and prominent writers like André Gide and Romain Rolland. Hounded by Stalinist agents, Serge lived in precarious exile in Brussels, Paris, Vichy France, and Mexico City, where he died in 1947.

Mitchell Abidor is the principal French translator for the Marxists Internet Archive and has published two collections of his translations, The Great Anger: Ultra-Revolutionary Writing in France from the Atheist Priest to the Bonnot Gang and Communards: The Paris Commune of 1871 as Told by Those Who Fought for It. His translation of A Socialist History of the French Revolution by Jean Jaurès will be appearing in April, as will his Voices of the Paris Commune. He is a recipient of a Hemingway Grant from the French Ministry of Culture for his translation of Emmanuel Bove’s novella, A Raskolnikoff, which will be published in fall 2105.

Richard Greeman is best known as the translator and prefacer of five of Victor Serge’s seven novels, most recently Men in Prison (PM Press). He is a founding member of the libertarian socialist Praxis Center in Moscow and Secretary of the Victor Serge Foundation, which supports the Victor Serge Libraries in Moscow and Kiev and underwrites translations and publication of Serge’s books in Russian and Arabic. Greeman has published literary, political, and biographical studies of Serge in English, French, Russian, and Spanish as well as prefaces to French editions of Serge’s books.