Discussion with Organizers of the Quebec Student Movement 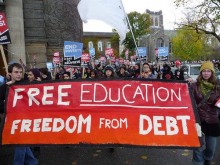 Join us for a discussion on the Quebec student movement and the 2012 and 2015 strikes in Quebec.

We will be joined by two participants who are students and social activists who have been working with ASSÉ (Association pour une solidarité syndicale étudiante) and P15 (Comité Printemps 2015), and who have been active in the movement in 2012 for the mass student strike over tuition and again this year for the social strike.*

Our idea is to create an occasion for NYC activists to ask questions, hear stories, and build bridges between movements.

Facilitated by Blanche Deschênes.
Organized by Unchain Our Schools