Featuring:
Mimi Chrzanowski- Cartoonist and Zinester “Just a Doll” (Providence, RI)
Penina Gal- Cartoonist “Limp Wrist” (Providence, RI)
Emma Karin- Zinester “Radical Domesticity” (NYC)
Emily S.- co-author “heartland comic” (Chicago, IL)
Come to our DIY workshop, sip coffee and learn from our featured artists on how to make your own comics or zines. This 2 hour workshop will consist of 4 comic and zine artists who will present their work in a casual roundtable setting at Interference Archive in Brooklyn. Coffee and vegan snacks will be provided. Featured speakers will talk about their experience as DIY makers and artists- where they sell, create, and distribute. The last hour of the session will be a workshop, where the artists will facilitate comic/zine-making with attendees.
This workshop is part of the programming for Our Comics, Ourselves: Identity, Expression, and Representation in Comic Art on view from January 21-April 17, 2016. 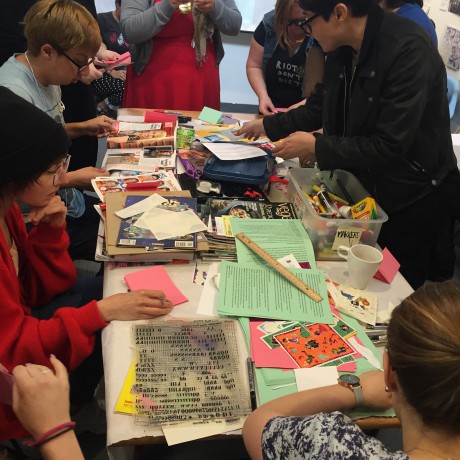 Mimi Chrzanowski was born in Chicago, IL, grew up in Tomah, WI, and now lives in Providence, RI. She is an illustrator, cartoonist, printmaker, animator, and after-school arts educator. Alongside her self-published comics, she has appeared in many anthologies and magazines including Happiness Comix, The Lifted Brow, Fvck the Media, Published by DMNS, New Folklore, and Advice Comics. She has exhibited her publishing work at comic and zine conventions in the US and Canada and has exhibited artwork at the Boston Center for the Arts, Carpenter Center for the Visual Arts at Harvard University, and Soho20 Chelsea Gallery in NYC. Her latest comic book, Made with Love in Hell, is coming out in May 2016 from Czap Book and Grindstone as part of their series of fine art fan comics called Ley Lines.
Penina Gal is a cartoonist and artist living in Providence, RI with a bunch of cats. Check out Penina’s comics at http://penina.net and pins at http://housebat.studio/
Established 1989 in the East Village of Manhattan, Emma Karin Eriksson wrote her first zine at the tender age of 14 with a group of gal pals huddled around a overheating copier in her mom’s office. After taking a brief six year hiatus she returned to zine making and created Radical Domesticity in an attempt to get her 9 roommates to clean up after themselves. She writes mainly to pass on practical information and to exorcise her inner demons; sometimes both at the same time. Emma Karin enjoys practicing her handwriting, cultivating a scissor arsenal and compulsively fretting. Past and current issues of her work can be found at www.PrettyDirtyPress.etsy.com
Emily S is the co-creator of heartlandcomic currently a web comic where she spills all of her juicy awkward and sometimes painful tales of growing up in the heartland. Emily lives in Chicago.

Next Post: Cartoonist Whit Taylor on Autobiography, Identity, and Self-Reflection in Comics >