Modern Times and The Idea 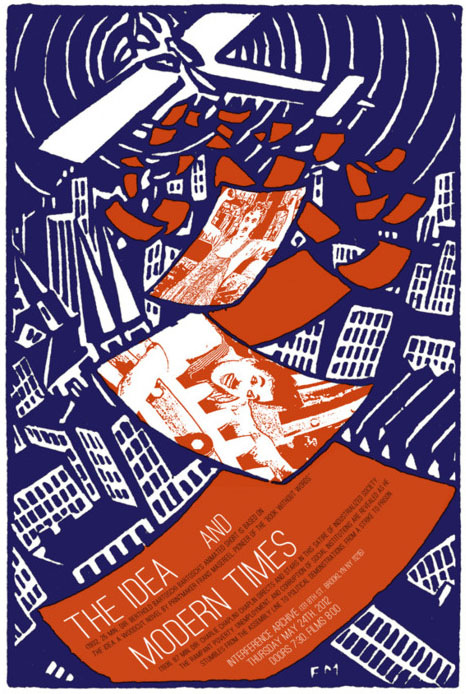 Interference Archive 131 8th St. Brooklyn, NY 11215
Modern Times (1936, 87 min., dir. Charlie Chaplin)
Charlie Chaplin directed and starred as the “Little Tramp” in this satire of industrialized society. The rampant poverty, unemployment, and corruption of social institutions are revealed as Chaplin stumbles from the assembly line, to political demonstrations, to strikes, and prison. Through his comedic clashes with the powers that be, he refuses to be become part of the machine.
The Idea (1932, 25 min., dir. Berthold Bartosch)
Berthold Bartosch’s animated short is based on the Idea, a woodcut novel by print maker Frans Masereel, pioneer of the “book without words”. It depicts a writer who summons forth an idea, symbolized by a nude woman springing from his head. She escapes into the world to challenge the social order. Bartosch, (who collaborated with Lotte Reiniger on The Adventures of Prince Achmed) used innovative techniques to produce ethereal special effects. The film’s haunting score was the first to use an electronic instrument, the ondes Martenot.