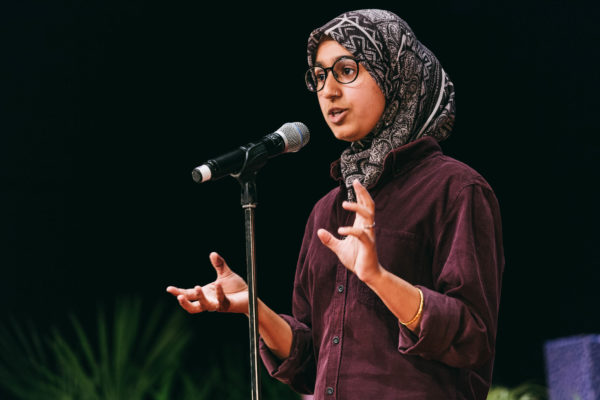 Tuesday, September 25, 7-9pm
Beyond the Good Muslim/Bad Muslim Binary: Understanding Islamophobia is an interactive workshop asking participants to engage in and question the narratives that frame the way Muslims are talked about in the West. The workshop will use the British context to explain and ask questions about the way pseudoscientific narratives that stem from colonial times are used to justify today’s racist and dehumanising practices by the state in a range of ways. It asks us to consider Islamophobia beyond the individual’s prejudice or “phobia” and more broadly as a formally sustained and encoded way of thinking about certain people as less human than others, justifying systems and apparatuses of surveillance, the unmaking of citizens and (ironically) the jeopardisation of democracy and increasing authoritarianism that threaten’s everybody’s rights.
Suhaiymah Manzoor-Khan is a writer, speaker, playwright, award-winning spoken-word activist and founder of the political blog www.thebrownhijabi.com. With a background in history and postcolonial studies focused on British state conceptions of Muslim sexuality in the counter-terrorism narrative, she writes and performs on issues of race, gender, Islamophobia, intersectionality, state violence and decolonising minds/bodies. She has been featured in The Independent, BBC, ITV, Sky TV, The Guardian, The Islam Channel, TEDx conferences, music festivals, US slams and UK universities. Her poetry has millions of views online and has been translated into multiple languages. All Suhaiymah’s activism is rooted in Islam.
This event is free and open to the public.