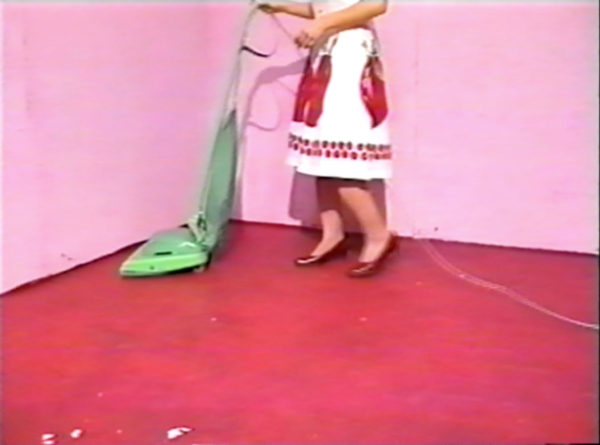 November 4, 7pm and November 5, 7pm
Interference Archive, as part of the exhibition We Are What We Archive, presents Joanie4Jackie4Ever, two nights of screenings and discussions focussed on the Joanie4Jackie project. Joanie4Jackie is a low-fi VHS distribution project of short work by women. Born out of the 1990s cultural movement of Riot Grrrl conventions, punk music, and cheap fanzine production, Joanie4Jackie was developed before the internet and before peer-to-peer file exchange. Conceived by filmmaker Miranda July in 1995, the project supported communication and connections between female media makers across the United States. Every woman who participated in turn received a compilation Chainletter VHS in which they found their video contextualized with at least nine other filmmakers’ work. No submission was rejected.
November 4th, 7pm: A roundtable discussion with Joanie4Jackie filmmakers, archivists and organizers. To be preceded by a screening of pure&magicalpussypower, a J4J documentary, by director Vanessa Haroutunian. This is an opportunity to hear first-hand accounts from the people who contributed, supported, and built the J4J project.
more info: https://www.facebook.com/events/687493198081325/
November 5th, 7pm: J4J Chainletter REMIX
Experience a Chainletter as it was originally viewed! Filmmakers include: Dulcie Clarkson, Kerthy Fix, Deborah Stratman, Vanessa Renwick, and Cat Tyc. Introducing the screening will be an authentic Joanie4Jackie title sequence made by the artist K8 Hardy. Filmmakers will be in attendance.
more info: https://www.facebook.com/events/1294050100629586/
Ongoing: Selections from the entire collection of Joanie 4 Jackie Chainletters will available at a viewing station in Interference Archive during our regular open hours. Also on display will be paper ephemera and videos from Tina Spangler’s collection, including copies of her zine Femme Flicke. In addition to this, other Joanie4Jackie filmmakers’ visual and textual material related to the project will be presented.