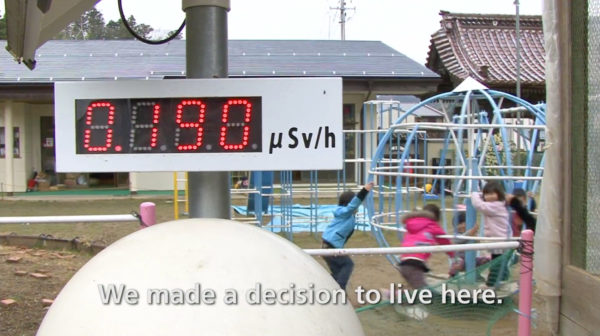 Sunday, August 19, 6:30PM-9:30PM
Join us for a joint screening of Little Voices from Fukushima by Sloths Against Nuclear State and the Radiation Monitoring Project. The screening will be followed by a discussion and a short presentation about a radiation monitoring efforts in the United States.
Little Voices from Fukushima (2014, 119 minutes, dir: Hitomi Kamanaka) travels between Fukushima and post-Chernobyl (1986) Belarus. Across national borders, people are making difficult decisions – whether it is safe to return home, to eat local produce, to let children play outdoors… In the absence of a single “correct” choice people are forced to navigate through divisions and ostracism while witnessing changes in children’s health. The film follows a group of mothers in Fukushima who formed a neighborhood association to share resources, support one another, and take action. Torn by living costs, husbands who do not share their perspectives on radiation, and neighbors who believe in government policy, the women share the common idea/conviction that the state will not protect them. It is the “little voices” of these women that rupture the everyday oppression that characterizes highly patriarchal, hyper-capitalist Japan, where the aftereffects of the 2011 nuclear disaster are ongoing and expected to continue into the foreseeable future. Trailer: https://youtu.be/3gy_mVZaUwA
Radiation Monitoring Project aims to put radiation monitoring devices into the hands of communities affected by ionizing radiation and to provide professional training to monitor, document, and understand how radioactive pollution impacts front-line communities. RMP is currently working to bring its next training to areas impacted by uranium mining in the southwestern United States. www.radmonitoring.org #radmonitoring