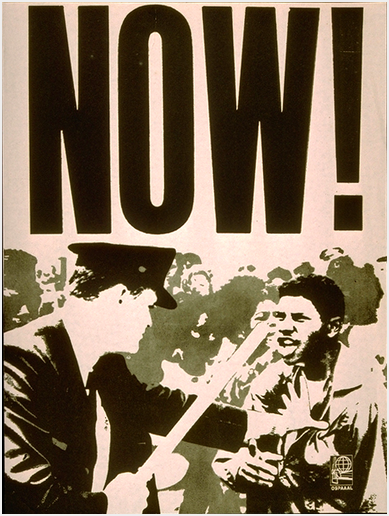 7pm
Free and open to the public; donations accepted.
As part of the Armed By Design/El Diseño a las Armas exhibition, we are hosting a film night of the work of Santiago Álvarez.
“Cinema is not an extension of revolutionary action. Cinema is and must be revolutionary action in itself.” – Santiago Álvarez
In March, 1959, three months after the Revolution, the Cuban government established the Instituto Cubano del Arte e Industria Cinematográficos (ICAIC) and installed Santiago Álvarez as the chief of the film institute’s Newsreel division. Responsible for overseeing the creation of hundreds of noticieros cinematográficos that were distributed throughout Latin America, Álvarez is best known for his energetic, montage-based cinematic broadsides of the 1960s that focused on imperialism and resistance to it. His brisk editing, emphasis on music, and use of materials ranging from live action documentary footage, archival film, and photographs to animations, comic books, and graphic designs garnered international acclaim. Like OSPAAAL posters and publications, Álvarez’s films were sent abroad as bold, graphic missives of international solidarity. 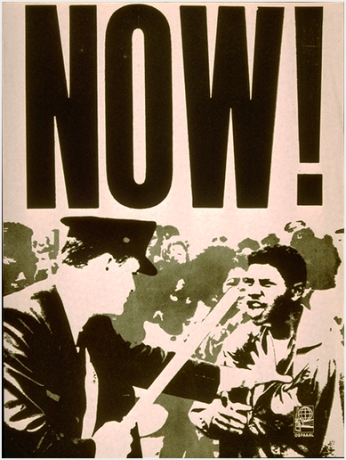 Join us for a screening of three of Álvarez’s most hard-hitting works. Now (1965) rhythmically edits photographs from Life magazine to a recording of Lena Horne’s song of the same name to present a searing cinematic indictment of U.S. racism. LBJ (1968) uses Álvarez’s irreverent satire to illustrate the traumas and blunders of American political leaders of the 1960s. And 79 Springtimes (1969), a cinematic eulogy celebrating the life of the recently deceased Ho Chi Minh, combines poetic evocations of Vietnam’s revolutionary leader with unremitting depictions of the horrifying effects of the American-led invasion.