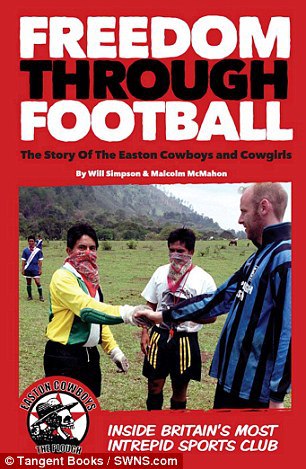 Book release
Freedom through Football: The Story of the Easton Cowboys and Cowgirls
by Will Simpson and Malcolm McMahon

The anarchist football team [Easton Cowboys] formed out of a kick-about between a group of punks and kids from St Pauls and in 2012 celebrated its 20th year. Freedom Through Football tells the tale of a journey that has seen them smuggled into Zapatista communities under cover of darkness, play cricket in Compton, South Central LA, and soccer on the dusty pitches of Palestine. Along the way they’ve sheltered asylum seekers from Mozambique, spent an afternoon as uninvited guests at Windsor Castle and been joined by rampageous netballers, can can dancers and an up and coming street artist named Banksy. At times it’s been nothing if not a bumpy ride – as a team and as individuals they’ve had to confront imprisonment, death, drug and alcohol problems and meet them all head on.
This is the world the Easton Cowboys and Cowgirls have created for themselves. Freedom Through Football is the guide to this punk and anarchist-inspired, community-minded club that truly is like no other in British sport.
Presented by one of the founding members, Roger Wilson