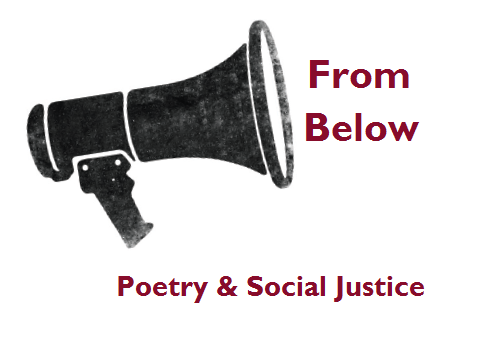 How do we make the world we want to live in? How does art help us re-imagine social and political reality? We want to answer these question by exploring the places where poetry and political activism intersect — and, maybe just as crucially, interrogating places where they don’t. Poetry, too often, is seen by activists as a mere decoration; activist community-building, too often, is treated by poets as an aesthetic choice. We need new approaches to both meaning-making and community organizing if we want to make radical change. From Below is a poetry and discussion series that aims to get this conversation started.
Join us for our inaugural event on April 26th from 7-9pm! Featuring poet and disability rights activist Cyrée Jarnelle Johnson and interdisciplinary creator Lynn DeSilva Johnson.
Cyrée Jarelle Johnson is a poet, essayist, and editor living in New York City. They are a Poetry Editor at The Deaf Poets Society and a candidate for an MFA in Poetry from Columbia University. Their work has appeared most recently in The New York Times and WUSSY. They have given speeches and lectures at The White House, The Whitney Museum of American Art, The University of Pennsylvania, Tufts University, and Mother Bethel AME Church, among other venues. Their work has been profiled on PBS Newshour, Mashable, and Rooted in Rights.
Lynne DeSilva-Johnson is an interdisciplinary creator, scholar and performer. They are an Assistant Visiting Professor at Pratt Institute, as well as Founder and Creative Director of The Operating System. As a chronically ill artist and arts administrator with C-PTSD and panic disorder, Lynne’s work addresses, in particular, the somatic impact of trauma on persons and systems, as well as the study of resilient, open source strategies for ecological and social change. Lynne is co-editor, with Jay Besemer, of the forthcoming anthology, “In Corpore Sano: Creative Practice and the Challenged Body.” They are the author of Ground, Blood Atlas, and “In Memory of Feasible Grace,” as well as two forthcoming titles, the chapbook “Sweet and Low,” (from Knife Fork Book in Toronto) and the collaborative Body Oddy Oddy, with painter Georgia Elrod. They perform, publish, teach, and show their work widely, and resist always. They are very much still beginning.