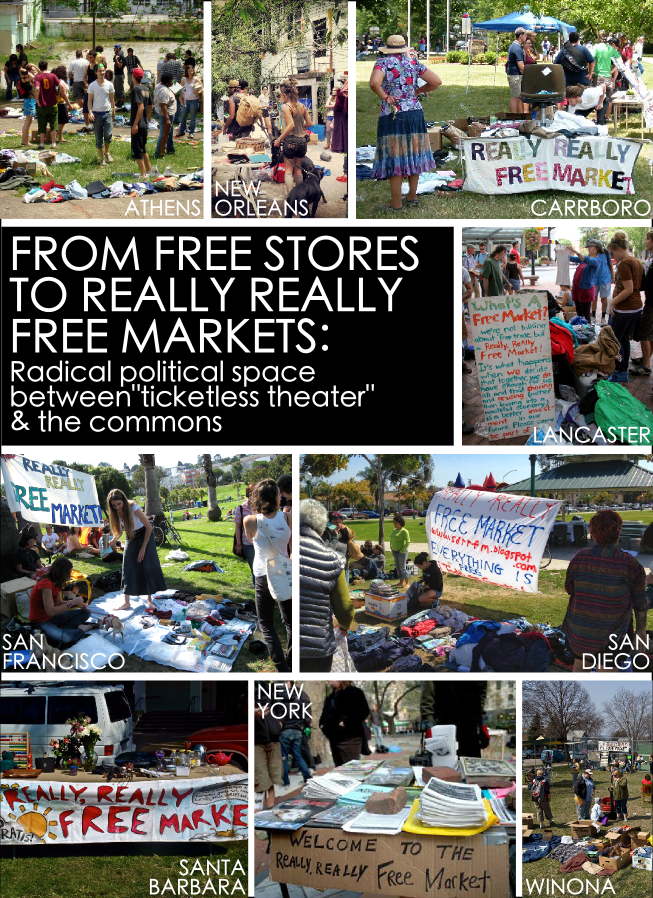 
Monday December 9, 2013
7pm
Join us for a talk with David Spataro, Interference Archive’s first scholar in residence for a presentation on his research on radical spaces and the commons:

In November 2003 during protests against the Free Trade Area of the Americas summit in Miami global justice activists organized a temporary, horizontal, convivial political space full of free goods and services. Amidst police repression that was notoriously ruthless, which would quickly become known as the “Miami Model” and replicated at subsequent summits, the Really Really Free Market became one of the ‘many yeses’ to compliment the ‘one (immense) no’ to neoliberal globalization. In the same fashion of other tactics like Food Not Bombs, Really Really Free Markets quickly spread to other centers of anti-neoliberal organizing.
In this talk, I will present research conducted with the New York City Really Really Free Market between 2010 and 2013. The talk begins with the history of the free stores of the San Francisco Diggers. In retelling this history, I look beyond a narrow understanding of them as simply utopian hippie spaces, and instead focus on the blend of theatrical and pragmatic elements in the Diggers’ expansive ‘free’ tactics. From here I will explore the relationship between dramaturgical politics of the past and prefigurative politics of the contemporary moment. And finally I will discuss some of the challenges that the Really Really Free Market tactic faces given what I call a ‘vexed relationship’ between “ticketless theater,” radical space, and urban commoning. We will save plenty of time for a discussion after the short presentation.