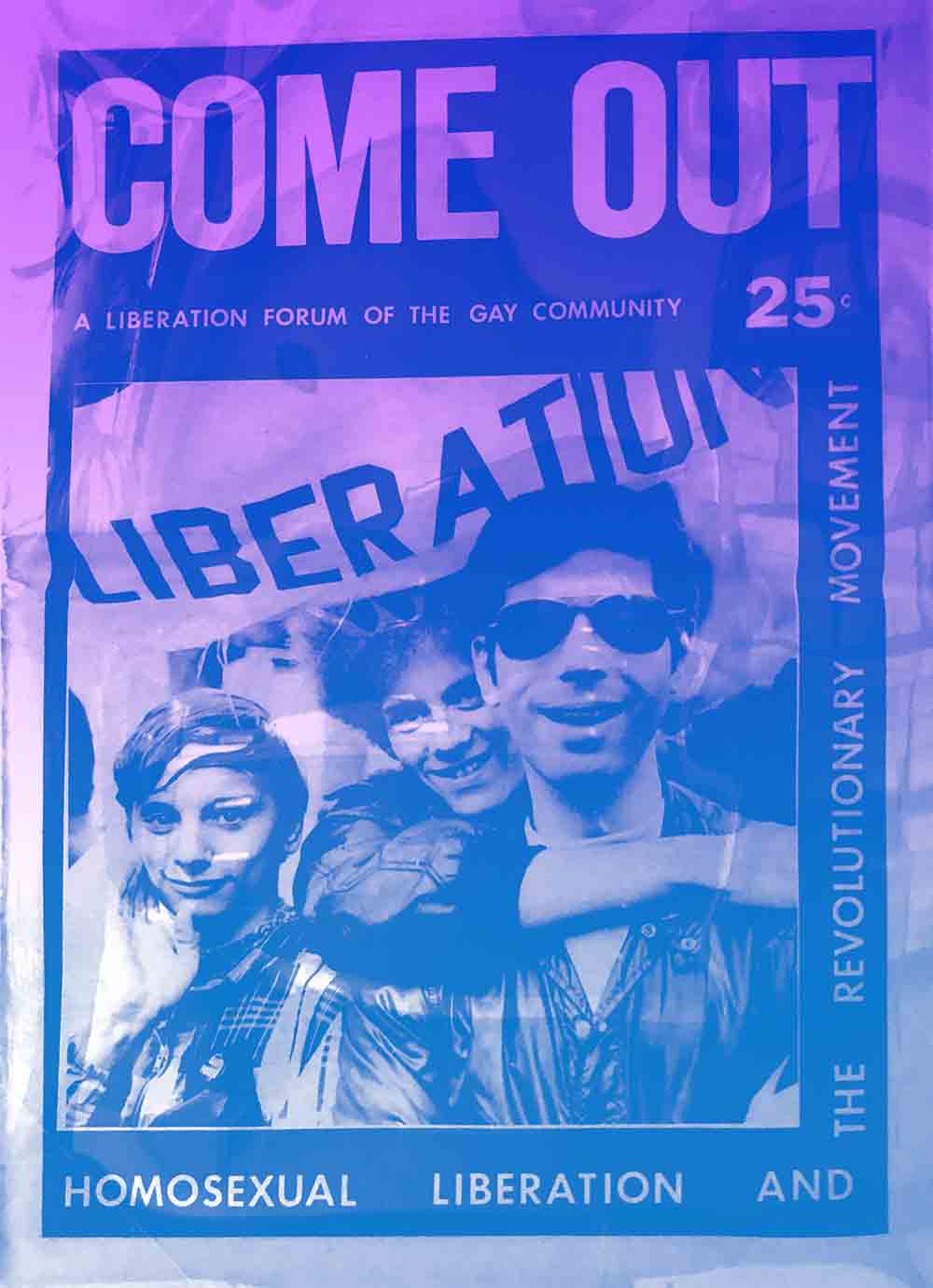 Thursday, January 24, 7pm
Come and join us for an evening of Gay Liberation at Interference Archive. Flavia Rando and Perry Brass will discuss their personal experiences during the early years of the struggle for gay rights in New York. Flavia and Perry were two of the gay activists who used the Alternate U as a meeting place for organizing as well as a liberated space hosting the world’s first public gay dances, including women’s dances. Alternate U became a meeting place for gay activists mobilizing after the Stonewall riots in 1969. The Gay Liberation Front published the first issue of Come Out! A Newspaper by and for the Gay Community from Alternate U in 1969. The front-page manifesto of Come Out! says:

“Come Out for Freedom! Come Out Now! Gay Power to Gay People! Come Out of the Closet before the Door is Nailed Shut! — Come Out!, a Newspaper for the Gay Community, dedicates itself to the joy, the humor, and the dignity of the homosexual male and female.”

Hear about how the Gay Liberation Front (GLF) emerged as a militant movement fighting for gay rights – and how the underground newspaper Come Out! was established as a voice of the GLF, promoting gay rights, lesbian feminism, and anti-sexism within the Movement and beyond. Come Out! was a part of a whole movement of underground, liberation newspapers published in this era. Flavia and Perry will also share their insights on the debates and conflicts that were an integrated part of establishing a front of very diverse lgbt people against the enforced sexual norms of mainstream society.
Flavia Rando, Ph.D., is an art historian who teaches Lesbian, Women’s and LGBTQ Studies. She is a coordinator of the Lesbian Herstory Archives. In 2011, she inaugurated the Lesbian Studies Institute at the Archives and will be teaching her ninth year of classes. To mark Stonewall 50, she and Elvis Bakatitis are preparing a course studying the first generation of Lesbian activists and how they bring their activism to the experience of aging.
Perry Brass has published 19 books, including poetry, fiction, science fiction, and advice books. His work stems from a visionary attitude toward all human sexuality coming from a core involvement with human values and equality derived from his involvement with the Gay Liberation Front which he joined in Nov, 1969, a few months after his 22nd birthday. In 1972, with 2 friends, he co-founded the Gay Men’s Health Project Clinic, the first clinic specifically for gay men on the East Coast, still surviving as the Callen-Lorde Community Health Center.
This event is part of a project sponsored by a Humanities New York Action Grant. Any views expressed in this exhibition do not necessarily represent those of the National Endowment for the Humanities.