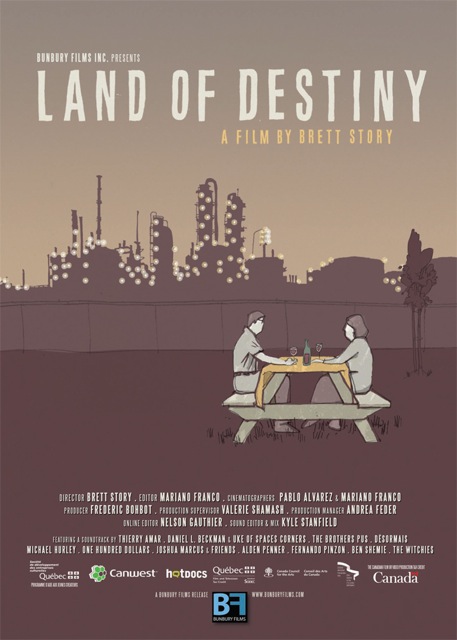 Film Screening, with Director/Writer Brett Story
Friday, November 30, 2012
7 – 10 pm
Land of Destiny (78 min., documentary), written and directed by Brett Story, focuses its lens on a hardworking petrochemical town rocked by revelations that its workers suffer an epidemic of cancers. But even more terrifying is the looming specter of deindustrialization and joblessness. Ex-pipefitters serving fries, basement musicians, boilermakers, volunteer firefighters, heartbroken widows, and an optimistic mayor — the lives of a diverse medley of characters intersect to reveal the dramas and contradictions of an industrial town out of sync with a postindustrial economy. In the rich fabric of the city’s landscape — rows of boarded-up storefronts, the bright sprawl of petrochemical plants and the swollen rooms of hospital wards and crowded bars — one finds a microcosm of the twenty-first century. A portrait of a working-class city in paralysis as well as a meditation on work and place in the modern economy, Land of Destiny offers an intimate story about labor, struggle, and survival.
Winner of the Canadian Environmental Media award in 2011 for “best documentary,” an honorable mention in 2010 at Planet Focus in Toronto, and an official selection in 2010 for the Recontres Internationales du Documentaire de Montréal, this documentary is directed by a good friend of Interference Archive; Brett will be on hand to introduce the film and discuss it afterward.