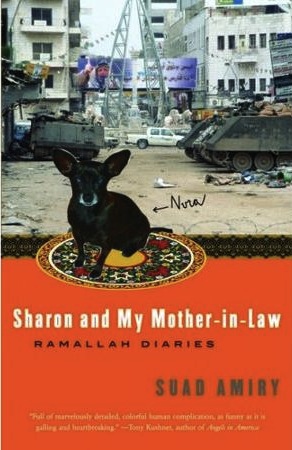 Monday, December 14, 7pm
Join Librarians and Archivists with Palestine (LAP) for a discussion with Suad Amiry, author of our 2016 One Book Many Communities selection Sharon and My Mother-in-Law. LAP’s One Book, Many Communities campaign will see people throughout the world organize reading groups and discussions about Sharon and My Mother-in-Law in January 2016. Based on diaries and e-mail correspondence that architect Suad Amiry kept from 1981 to 2004, Sharon and My Mother-in-Law gives a firsthand glimpse into the absurdity — and agony — of life in the Occupied Territories.
Suad Amiry is an architect and the founder and director of RIWAQ, Centre for Architectural Conservation, in Ramallah. She grew up in Amman, Damascus, Beirut, and Cairo, and studied architecture at the American University of Beirut and at the universities of Michigan and Edinburgh. Amiry participated in the 1991–1993 Israeli-Palestinian peace negotiations in Washington, D.C., and from 1994 to 1996 was assistant deputy minister and director general of the Ministry of Culture in Palestine. She is the author of several books on architecture and was awarded Italy’s Viareggio-Versilia Prize in 2004 for this book. She lives in Ramallah.
For more information, visit http://librarianswithpalestine.org/onebook