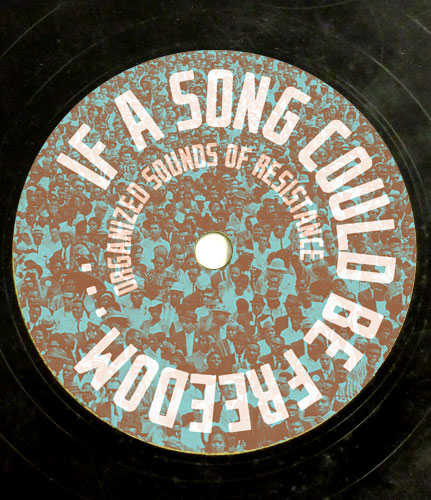 Thursday, September 3, 2015
7–9pm
We’ve got two things to celebrate! if a song could be freedom . . . Organized Sounds of Resistance has had a great run, but is closing on Sept. 6th, so this will be one of the last chances to see it!
In addition, we pressed a limited edition 7” vinyl record in collaboration with Textual Records to go with the show!! We’ve been hard at work on it for months, and we’ll finally be releasing it tonight.  Pre-order your copy now!
The 7″ record features a booklet about music and politics, as well as five international political songs which have fallen out of circulation:
— “The Internationale” (rendition from Kurdistan)
—”Pfumo Nya Ku Pele” by Coral das Forças Populares de Libertaçåo de Moçambique (a revolutionary Mozambican call and response)
—”Workers–Get Ready” (a 1970s soul send-up from the Progressive Labor Party)
—”Bambini Pianificanti” by the Gruppo Musicle de Comitato per il Saleario al Lavoro Domestico di Padova (a song from the Italian Wages for Housework movement)
—”Got a Union in this Town” by the Mountain Musicians Cooperative and June Appal Recordings (a pro-union folk ballad from Appalachia)
Come on out and celebrate the release of the record and the closing of if a song could be freedom… with a party! If you pre-ordered a record you can pick up your copy, and everyone else will be able to purchase one at the event. There will be beer, socializing, and, of course, music.