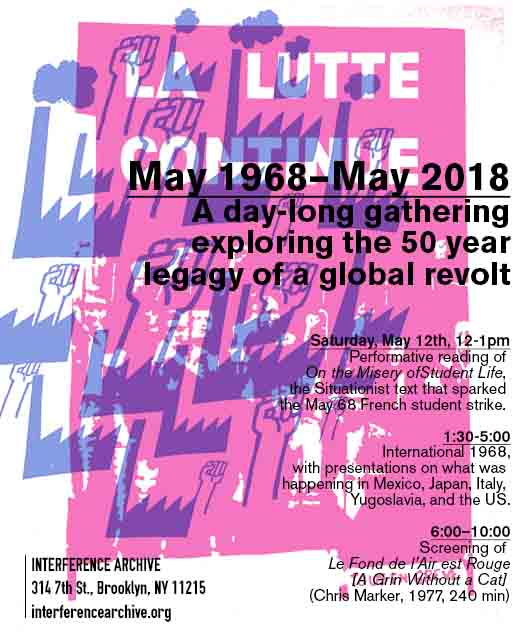 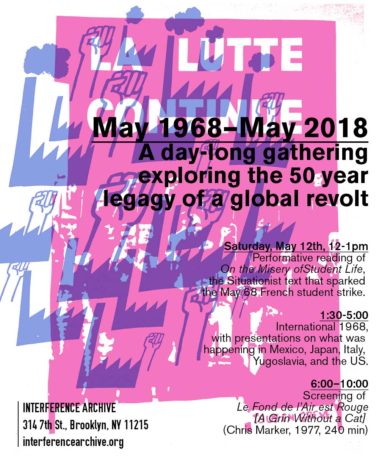 Saturday, May 12, 2018
12–10pm
Join us for a day-long gathering looking at the impact of the global uprisings of 1968 on our lives and communities in 2018. We’ll have snacks and some drinks, and we’re going to try to set up a grill, so if you’re in the mood, bring things for grilling!
12–1:30pm
Student activists and others will be doing a performative reading of On the Poverty of Student Life, a key Situationist text which helped launch the 6-week student and worker revolt in France, May 1968.
2–4:30pm
A series of organizers and historians will be discussing the international activities of 1968:
–Susana Draper on the student movement, Olympics, and massacre in Mexico City
-Filip Erdeljac on Yugoslavia
-Johanna Fernandez on the Young Lords
–Sabu Khosa on the Japanese Student Movement (Zengakuren and more)
-Giulia Sbaffi on Rome ’68 and its influence of the next generation

6–10pm
Screening of Le Fond de l’Air est Rouge [A Grin Without a Cat] (Chris Marker, 1977, 240 min). This sprawling essayistic film is a key document collecting footage from over a dozen countries in from the late 1960s into the early 1970s, and is one of the best windows into the meanings and impacts of 1968.