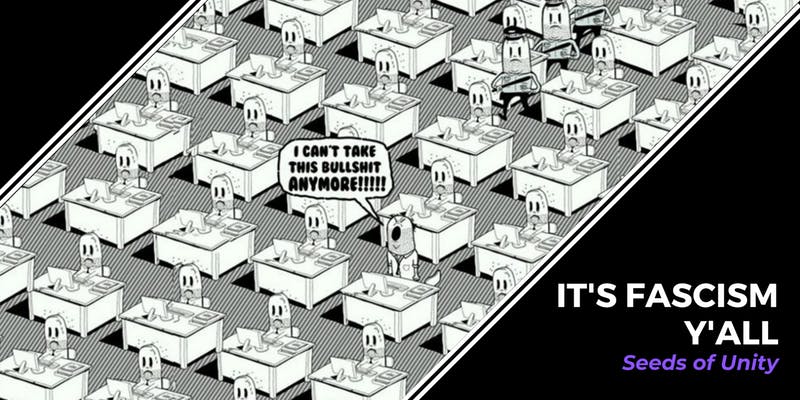 Let’s get off our phones and into the real world to discuss our agreements, disagreements and struggle for a path forward.

In this moment of “fake news,” relativism and historical amnesia, concepts matter. Concepts allow us to construct a lens to interpret and affect the world around us.

Join One Struggle for Seeds of Unity: It’s Fascism Y’all

This presentation and discussion marks the launch of our “Sprouting Theory” series.

We’ll start to unpack what fascism is – a political and ideological form capitalism takes to deal with economic crisis.

How we can resist fascism… It’s deeper than punching Nazis.

The importance of getting organized for a genuinely progressive alternative… This means breaking out from the confines of electoral politics and non-profits.

Capitalism is in crisis. Violent manifestations of this fact are becoming more frequent around the world. Fascist ideas are growing globally. We’re losing democratic rights.

More and more people are experiencing first hand the desperation of living in a system whose only concern is the accumulation of profit for the capitalist class. The planet is reaching the limitations of its ability to sustain the exploitation of industry.

Many of us are disillusioned with the current societal arrangement. But, we’ve been disorganized, and we don’t have a shared understanding of what’s in front of us… so how can we act to alter it?

Let’s get off our phones and into the real world to discuss our agreements, disagreements and to struggle for a path forward.

We will not be spectators as capitalists run people and the planet into the ground.