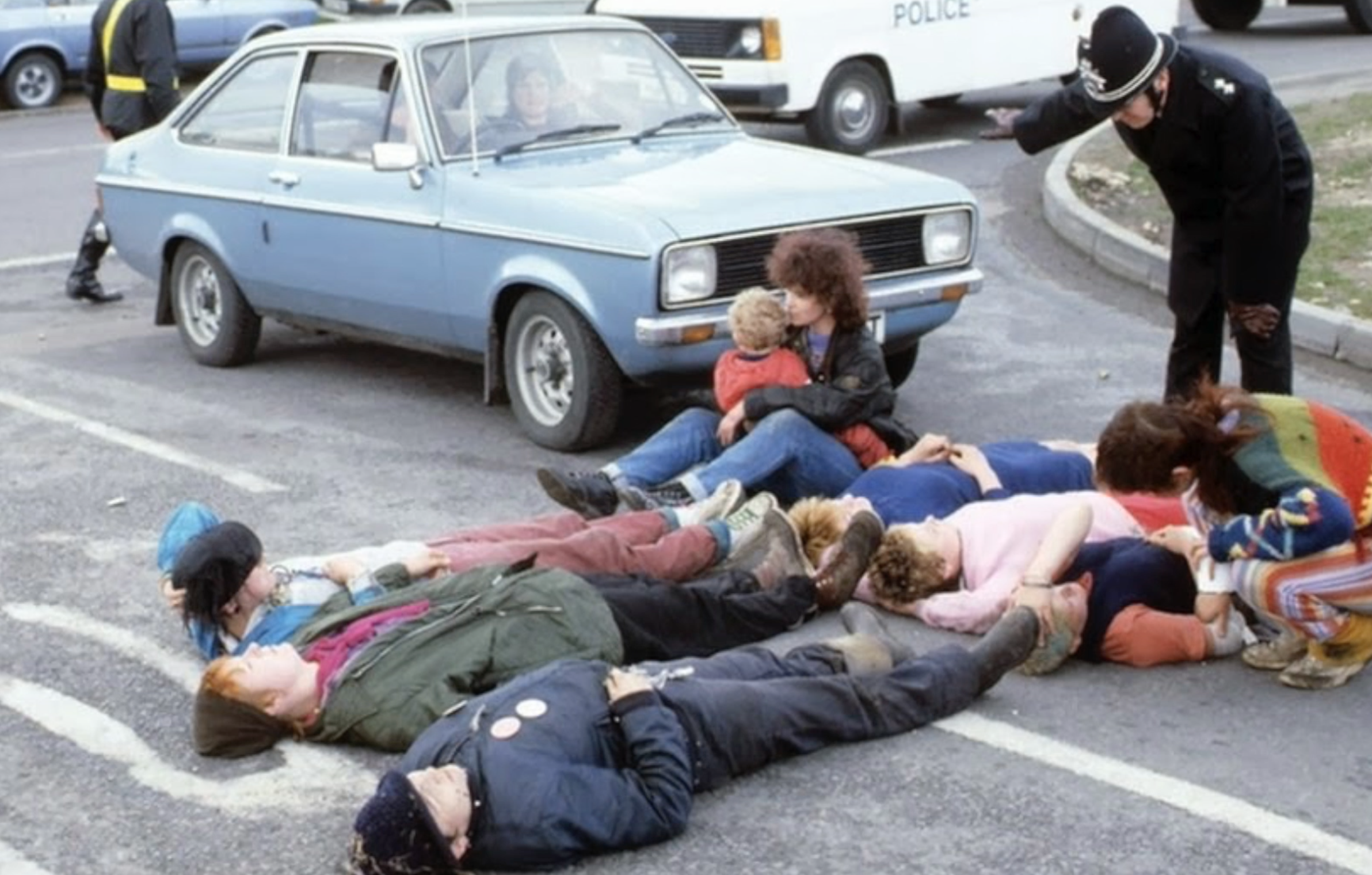 Saturday February 7
Open House 2-4pm
Conversation: 4-6PM
Join us for an open house and conversation with women who spent time at Greenham Common Women’s Peace Camp. Participants include Silvia Frederici, Nanna Gro Henningsen, Gwyn Kirk, Ann Snitow and Rae Street— who will share their experiences about how the occupation impacted their lives and politics.
Participant Bios:
Silvia Federici is a feminist activist, writer, and a teacher. In 1972 she was one of the co-founders of the International Feminist Collective, the organization that launched the international campaign for Wages For Housework (WFH). In the 1990s, after a period of teaching and research in Nigeria, she was active in the anti-globalization movement and the U.S. anti-death penalty movement. She is one of the co-founders of the Committee for Academic Freedom in Africa, an organization dedicated to generating support for the struggles of students and teachers in Africa against the structural adjustment of African economies and educational systems. From 1987 to 2005 she taught international studies, women studies, and political philosophy courses at Hofstra University in Hempstead, NY. All through these years she has written books and essays on philosophy and feminist theory, women’s history, education and culture, and more recently the worldwide struggle against capitalist globalization and for a feminist reconstruction of the commons.
Nanna Gro Henningsen is a Danish visual artist and associate professor in Art- history and -theory at The Jutland Art Academy and Aarhus School of Architecture. Based in Copenhagen, she works with theater, performance, and visual arts.
Nanna Gro Henningsen became a political activist at the age of 16, taking part in Greenpeace blockades against transports of raw uranium from Greenland to the Danish experimental nuclear plant Risoe. She also engaged in the local dockworkers strike, the squatter movements anti-gentrification battles in Copenhagen and in developing the local peace movement through reading circles, training groups in non-violent action After the Nordic Peace March to Paris in 1981, Nanna went to Greenham Common.
Gwyn Kirk is a writer, teacher, and organizer involved in the Greenham movement in the 1980s: participating in direct actions at Greenham Common and in London, filming early actions, public speaking, fundraising, and organizing U.S. speaking tours for plaintiffs in the lawsuit, Greenham Women vs Reagan et al. She was a co-founder of the International Women’s Network Against Militarism in the 1990s with women from Japan, Okinawa, South Korea and the Philippines, as well as Women for Genuine Security, the US-based partner in this Network.
Her co-authored work includes Greenham Women Everywhere; Women’s Lives: Multicultural Perspectives; and the independent documentary, Living Along the Fenceline. Her articles on feminism, militarism, and transnational feminist organizing have appeared in anthologies and journals including The Asia-Pacific Journal, Berkeley Women’s Law Journal, Foreign Policy in Focus, Frontiers, Peace Review, and Social Justice. She writes for popular audiences through activist publications and projects, including scripts for Fashioning Resistance to Militarism, a popular education project. www.gwynkirk.com
Ann Snitow
“A feminist activist and writer, I have combined these activities with being a university professor since 1969. It’s all connected: imagining and reading about change, being skeptical about the meaning of particular social changes, being part of change. What I wish for my students: action and criticism of the action taken, engagement and distance, and, finally, pleasure in this inside/outside life. My next book, The Feminism of Uncertainty, with a chapter on Greenham Common,  is forthcoming from Duke University Press, Fall, 2015.”
Rae Street has been involved in anti-nuclear, anti-militarism and peace campaigning for more than three decades. She is a long time activist in CND UK (Campaign for Nuclear Disarmament, whose ‘logo’ is recognized as a peace symbol throughout the world. She was a ‘Greenham woman’ and toured the States in the late 80s to raise awareness of Cruise missiles whilst raising funds for Greenham Women Against Cruise Missiles. She worked also to bring peace and anti nuclear groups together between the UK and the USA in a People-to-People programme. While always having been keenly aware of making international links, at the same time, she has always taken an active part in peace activities in her home town of Rochdale, in the north of England, and for Greater Manchester and District CND.
In 1999, she was a founder member of CADU (the Campaign Against Depleted Uranium Weapons) in the UK, established a national office in Manchester, UK, and has been Coordinator ever since. From its inception she and CADU have supported the International Coalition for a Ban on Uranium Weapons whose office is also in Manchester, UK.
Over the years she has indeed been involved in all these serious weighty matters, but also had lots of fun and companionship working with her sister resisters. When she was young and rebellious her mother always thought as Rae got older she would ‘settle down’. She hasn’t.