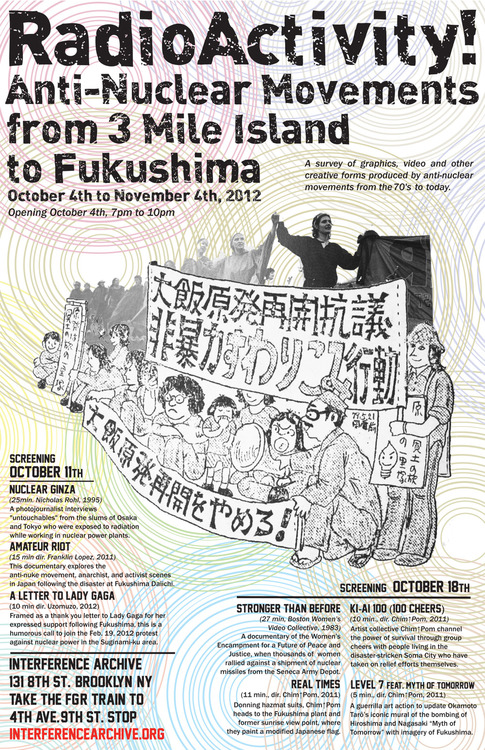 This series is part of the exhibit RadioActivity! Anti-nuclear Movements from Three Mile Island to Fukushima, a collaboration between Interference Archive and Todos Somos Japon that runs until November 4. These movies highlight feminist resistance, direct action, and the creative interventions of collectives in the anti-nuke movement.

October 11, 2012, 7:30 pm
Nuclear Ginza (25 min., dir. Nicholas Röhl, 1995)
We follow photojournalist/antinuclear activist, Kenji Higuchi as he exposes the exploitation of the “untouchables,” who were pulled out of the slums of Tokyo and Osaka in order to work in power plants. They were exposed to radiation, often without their knowledge. The film shows how Japan, having suffered nuclear attacks in the past, remarkably transformed itself within a few decades into one of the most “nuclearized” nations worldwide.
Amateur Riot (15 min., dir. Franklin Lopez, 2011)
Director Franklin Lopez focuses on burgeoning antinuke movement in Japan, following the disaster at the Fukushima Daiichi nuclear power plant, in this dispatch. He explores not only the antinuke movement but also the anarchist and activist scene in Japan.
A Letter to Lady Gaga
(10 min., dir. Uzomuzo, 2012)
A lyrical short protest piece by a group of activists called Uzomuzo, meaning “masses.” The video is a call to join the February 19, 2012, protest against nuclear power in the Suginami-ku area, framed as a humorous thank you letter to Lady Gaga for her support following the Fukushima Daiichi power plant disaster.

October 18, 2012, 7:30 pm
Stronger Than Before (27 min., dir. Boston Women’s Video Collective, 1983)
A documentary of the Women’s Encampment for a Future of Peace and Justice, when thousands of women rallied against the scheduled shipment of nuclear missiles from the Seneca Army Depot.
KI-AI 100 (100 Cheers) (5 min., dir. Chim↑Pom, 2011)
Members of the artist collective Chim↑Pom channel the power of survival through group cheers with people living in the disaster-stricken Soma City who have taken on relief efforts themselves.
LEVEL7 feat. Myth of Tomorrow (5 min., dir. Chim↑Pom, 2011)
A guerrilla art action to update Okamoto Tarô’s iconic mural of the bombing of Hiroshima and Nagasaki, Myth of Tomorrow, with imagery of Fukushima.
Real Times (11 min., dir. Chim↑Pom, 2011)
Donning hazmat suits, Chim↑Pom heads to the Fukushima plant and former sunrise viewpoint, where they paint a modified Japanese flag.