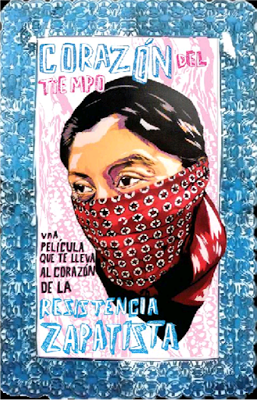 Thursday, June 12, 2014
7-9pm
Corazon del Tiempo (Heart of Time) is a film about love in the time of Zapatista Resistance. Things get complicated when Sonia, a Zapatista civilian supporter living in an autonomous community, falls in love with Julio, an insurgente (rebel fighter), because she is already promised to Miguel, a young community leader. The film shows how the community deals with this romantic dilemma. Spanish with English subtitles.
Corazón del Tiempo was filmed in a Zapatista community in the heart of the Lacandón Jungle of Chiapas, Mexico. The actors are all non-professional Zapatista actors who uncovered their faces and opened their communities for the world to see.

This event is sponsored, in part, by the Greater New York Arts Development Fund of the New York City Department of Cultural Affairs, administered by Brooklyn Arts Council (BAC).