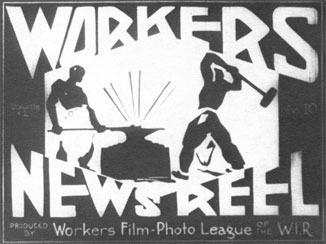 The Workers Film and Photo League (founded in 1930) was a cultural arm of the Workers International Relief, which gave support to workers on strike.  From picket lines to nationwide marches against unemployment, anti-fascist demonstrations, and more, the League documented the social unrest that defined the Depression years.
We are excited to present these films with original scores and musical accompaniment by artist Todd Chandler.  Marty Lucas, media activist and educator, will introduce and facilitate a discussion on the history and context of Worker’s Film and Photo League, their production and distribution.
Serving as an antidote to Hollywood representations of the working class and commercial newsreels, the documentaries produced by the Workers Film and Photo League were brought to union halls and workers’ clubs, boosting morale for those in the struggle.  Few of these films survive today, and those that remain were preserved and restored by League filmmaker Leo Seltzer.  As a predecessor of today’s Indymedia, these films are early experiments in radical social documentary filmmaking.
Workers Newsreel Unemployment Special, 1931, 7 min.
Shows the first mass demonstration against unemployment and hunger, in Union Square, New York City, on March 6, 1930.
Detroit Workers News Special 1932: Ford Massacre, 7 min.
The only newsreel coverage of the historic mass march in downtown Detroit on February 4, 1932, against the starvation program of Hoover/Murphy, and the armed, unprovoked attack by Dearborn police and Ford “guards” on unemployed auto workers at the gates of the River Rouge plant.
Hunger, the National Unemployment March to Washington, 1932, 18 min.
Documents thousands of people marching from around the U.S. to Washington, D.C., as part of the second National Hunger March
America Today, 1932-1934, 10 min.
A news review of mass actions in the streets including workers’ strikes, demonstrations to free the Scottsboro Boys, protests against a visit to the US by a Nazi emissary, and more.
Bios:
Todd Chandler is a film and video maker and a musician. He creates expressionistic films about journeys and issue-driven documentaries. His films have been featured at the Human Rights Watch International Film Festival, Chicago Underground Film Festival, The United Nations African Issues Screening Series and the Margaret Mead Film and Video Festival. In 2006 he helped create The Miss Rockaway Armada, and in 2008 he directed FLOOD TIDE using the rafts and their journey as a centerpiece. He is currently curating the Empire Drive-In, a multi-media installation drive-in movie theater made out of wrecked cars.
Martin Lucas is an artist, educator and media activist. His first film, Tighten Your Belts, Bite the Bullet (1980, New York Film Festival) produced with James Gaffney and Jonathan Miller, was a look at the costs and effects of the 1970s bankruptcy of New York City. As a founding member of the Paper Tiger Television Collective, Martin was one of the producers of The Gulf Crisis Television Project in 1991.  His latest film Cold Shutdown, reveals life in Fukushima, post-nuclear disaster.
Further reading on the Workers Film and Photo League:
Interview with League Member Leo Seltzer from Jump Cut, no. 14, 1977
Film and Photo League Filmography from from Jump Cut, no. 14, 1977