Solidarity with Cuba: a panel discussion 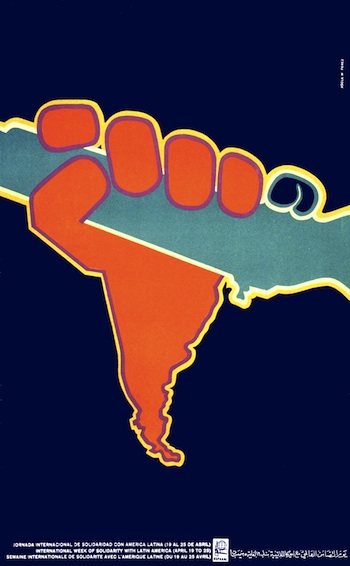 In connection with the Armed by Design/El Diseño a las Armas exhibition, this panel features members of the Venceremos Brigade, the Center for Cuban Studies, Pastors for Peace, and the National Lawyers Guild together to discuss a long history of solidarity work with Cuba.
In 1969, a coalition of young people formed the Venceremos (“We Shall Overcome”) Brigade, as a means of showing solidarity with the Cuban Revolution by working side by side with Cuban workers and challenging U.S. policies towards Cuba. Over the last four and half decades, the V.B. has given over 9,000 people from the U.S. the opportunity for a life-changing experience through work, educational activities, and travel. As the oldest Cuba solidarity organization in the world, the Venceremos Brigade believes that we have much to learn from Cuba and the best way to do that is to travel there and see for ourselves.
The mission of the Center for Cuban Studies is to educate the U.S. public about Cuban art and culture, promote the work of Cuban artists and work toward the resumption of full educational and cultural exchanges between our two countries. The Center for Cuban Studies has been sponsoring cultural exchange programs for many years and in those years has accumulated a collection of several thousand art works – paintings, drawings, sculpture, posters and prints, photographs, handmade books, and crafts. In 1991 the Center spearheaded a successful lawsuit against the U.S. Treasury Department. This made the importation and sale of original art from Cuba legal, and in 1999 the Center opened its own gallery, the Cuban Art Space.
Pastors for Peace / Interreligious Foundation for Community Organization (IFCO) is a an interfaith organization which assists oppressed peoples in their fight for justice and self-determination. Since 1992, IFCO has worked to bring an end to the immoral and unjust US economic blockade of Cuba and has provided humanitarian aid to the Cuban people through Friendshipment caravans, construction brigades and educational delegations. These caravans have delivered countless tons of humanitarian aid to the Cuban people, as a nonviolent direct challenge to the brutal US economic blockade of Cuba. The caravans, brigades and delegations have also provided an opportunity for numerous US citizens to see Cuba with their own eyes. In addition to the Friendshipment caravans to Cuba, IFCO organizes study tours, delegations, construction brigades, speaking tours, exchanges, and advocacy projects in various parts of Central America and the Caribbean, all in favor of a more humane US foreign policy in our hemisphere. IFCO also provides support for grassroots community organizing projects in urban and rural regions of the United States.
The National Lawyers Guild is dedicated to the need for basic change in the structure of our political and economic system.  We seek to unite the lawyers, law students, legal workers and jailhouse lawyers to function as an effective force in the service of the people, to the end that human rights shall be regarded as more sacred than property interests.
Our aim is to bring together all those who recognize the importance of safeguarding and extending the rights of workers, women, LGBTQ people, farmers, people with disabilities and people of color, upon whom the welfare of the entire nation depends; who seek actively to eliminate racism; who work to maintain and protect our civil rights and liberties in the face of persistent attacks upon them; and who look upon the law as an instrument for the protection of the people, rather than for their repression.