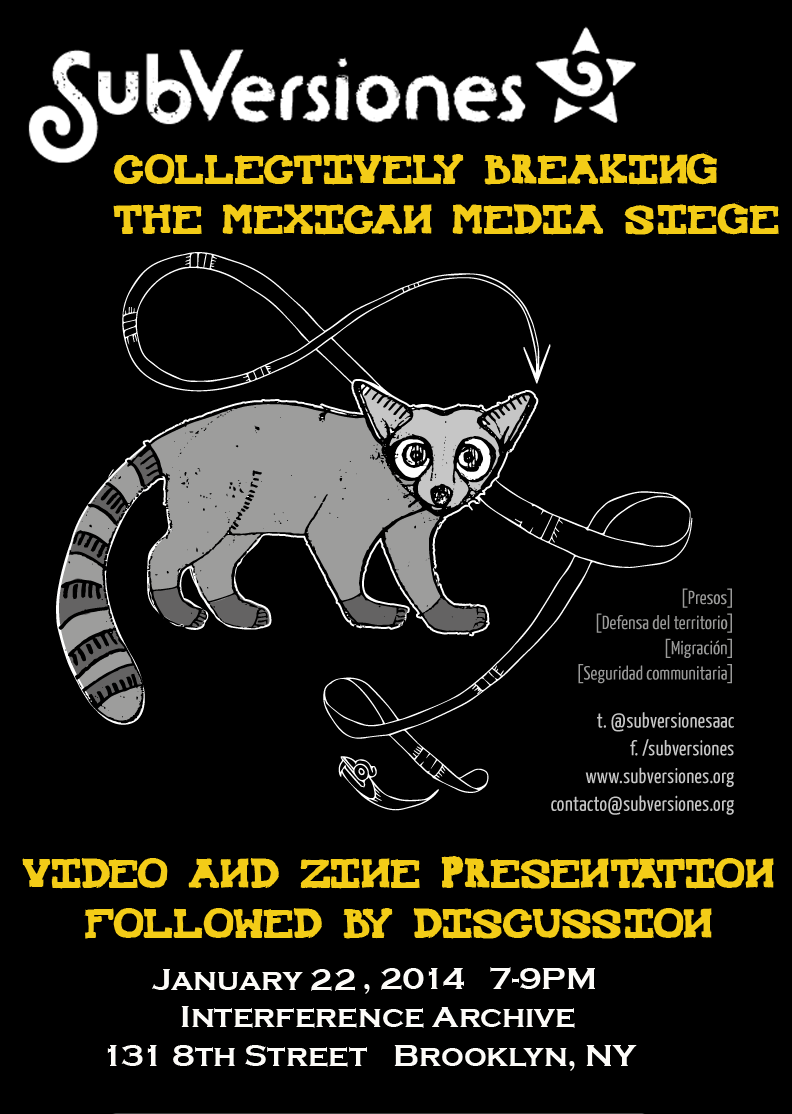 Join member of Mexican media collective Subversiones, Andalusia Knoll for a a video presentation and discussion about auto-defense groups, political prisoners, migration, and defense of the land.  Subversiones is a entirely volunteer-run media collective that was born 4 years ago and has become an increasingly essential tool for breaking the corporate media siege in Mexico.
Over the past year, since right wing president Enrique Peña-Nieto took power following a highly disputed elections, repression of social movements has skyrocketed and Subversiones has become a constant presence at street protests.  Subversiones members film, photograph and record both to document police abuse as well as amplify the voices of teachers protesting education reform, residents protesting transit fair hikes and privatization of oil as well as the liberation of political prisoners.  While documenting these events, members of Subversiones have been arbitrarily detained provoking debate about the role and legitimacy of independent media and the lack of freedom of press and expression in Mexico.
Confronting the drug war crisis that has left tens of thousands of people dead in the last 7 years, thousands of Mexicans in small towns, largely in Michoacan and Guerrero, have formed, self-defense groups, taking up arms to defend their communities against narco-violence often in cahoots with government forces.  Subversiones has travelled to many of these isolated areas to capture the voices of those who have taken security into their own hands.
In this presentation Andalusia will present spanish language videos subtitled in english covering these issues and also a zine featuring articles and photos on these social movements.  There will be a discussion following the videos and an opportunity to chat via the internet with other collective members of Subversiones. There will also be artwork available by two Mexican art collectives The School of Popular Culture of the Martires of ’68 (ECPM68) and Women Printing Resistance (Mujeres Grabando Resistencias)
single.php