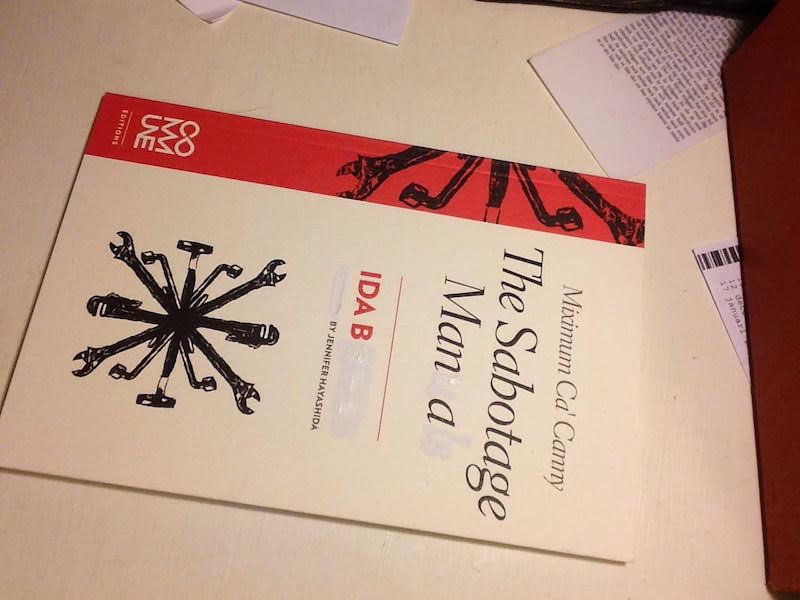 Friday, March 31st, 7pm
An evening with a redistributed collective reading of Miximum Ca’ Canny The Sabotage Manuals – you cutta da pay we cutta da shob (Commune Editions, 2016) by and with Ida Börjel & Jennifer Hayashida, AKA Jen Börjelhayash-Ida.
In a predominant languaging of bullshit, ersatz behavior, corporate and political lingo-slinging, where belief competes with truth, how do we take up words?
Evan Calder Williams writes, ”[W]e might consider sabotage, at the most abstract level, as the deployment of a technique, or activation of a capacity, at odds with the apparatus, system, or order within which it is situated and for which it was developed.”
At odds. How do we look upon our works of poetry and art in a troubled time? If poetry is seen as language’s excess, it cannot be reduced to information. If poetry is a reopening of the indefinite, the ironic act of exceeding the established meaning of words, can it also be a refusal, the sketching of fine threads of deviation available to poets and artists as strategies of protest, of refusal and insistence at the level of language?
Do we speak, think, write, like in a factory? (…) Do we talk to each other as in a factory? And when we speak of “madness,” what are we talking of ? A place, a situation, a way of behaving that are “mad”? Is language mad, has language become mad? How can we fight, with what forms can we fight, the attempts to make everything trivial, to promote anecdotes, clichés that are empty and aggressive, even murderous, clichés that are the present form of the “opium of the people”?
– Leslie Kaplan
From Miximum Ca’ Canny The Sabotage Manuals – you cutta da pay we cutta da shob
Communication
now and then when I want half a day off and
they don’t give it to me I let the belt slither off
the machine so that it doesn’t work and I get
my half day I don’t know if you call it
sabotage     but that’s what I do
delay     give the wrong number     happen
to disconnect     forget
mutter     make conversations difficult or
impossible to understand
distort telegrams so that additional ones need to be
composed     sometimes simply by
changing a letter     from “minimum” to
“miximum”     then they won’t know if
minimizing or maximizing is at stake
a letter     a punctuation mark     to move a
comma     from “access denied, control” to
“access, denied control”
at the screening of propaganda films place two or
three dozen large moths in a paper bag     bring
to the movie theater     place on the floor in an empty row
the moths will fly out into the theater
towards the light
and when they climb over the projector
the film becomes an agitated fluttering shadow play
so they will sound as though they were passing
through a thick cotton blanket with mouths
full of gravel
so that the line can no longer be used
so they do not move
but flutter     disturb
the automated gaze
BIO(S)
Jen Börjelhayash-Ida, born in Sweden and USA and living in Röstånga and in Brooklyn. Currently writing and translating Solmas Sharif’s Look and at work on remedializing neocapitalist narrations of success through cuteness in a research project at Malmö University while also directing the Asian American Studies Program at Hunter College, CUNY. Awarded.