We Are Who We Archive: an exhibition of new acquisitions 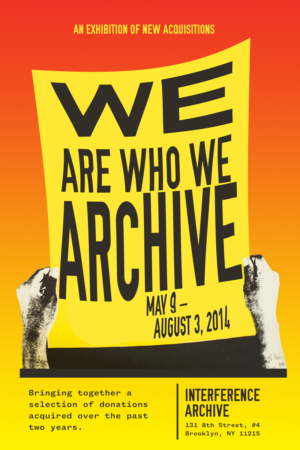 May 9 – August 3, 2014
Opening: Friday, May 9, 7-10pm
Curated by Louise Barry
We Are Who We Archive brings together a selection of donations acquired over the past two years, gifted by friends of Interference Archive, including Valerie Barr, Bound Together Bookstore, George Caffentzis and Silvia Federici, Alexis de Veaux, Lawrence Frank, Sky Hall, Lewanne Jones, Nancy Peckenham, Penelope Rosemont, and the Yippie House.  The exhibition represents a wide variety of movements, ideas, and objects, from stamps issued by the Industrial Workers of the World in the 1950s, to 1980s photocopied Polish “samizdat” newsletters, to buttons and stamps produced by the New York Wages for Housework committee in 1975.  The curators chose to focus on acquisitions that may be less familiar to contemporary audiences; as a result, the most recent materials in this exhibition date from the early 1990s.
As an “archive from below,” Interference Archive’s content is not determined by a scholar or expert, but by the same community that supports the archive.  In many cases, an object’s donor is also its creator, or was an integral part of the movement that produced it.  By keeping, maintaining, sorting, and ultimately donating radical movement ephemera, our donors determine which documents have lasting value—taking on the role of archivist of their own movements.  Rather than focus on a specific movement or idea, We Are Who We Archive serves as a portrait of a growing archive and highlights the role of individuals in preserving collective history.
This exhibition is sponsored, in part, by the Greater New York Arts Development Fund of the New York City Department of Cultural Affairs, administered by Brooklyn Arts Council (BAC).