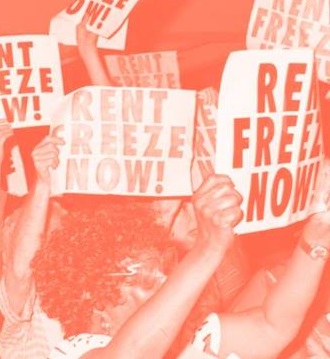 Sunday, June 14, 4pm
Join us for an afternoon of short films about housing justice in NYC to celebrate the closing of this exhibition after a great three months!
Heart of Loisaida (1979, 30 minutes)
Directed by Marci Reaven and Beni Matias
Depicts the efforts of Latino residents of New York’s Lower East Side who have taken over their own buildings abandoned by landlords. Organizing themselves into Tenants’ Associations, they undertake the repair and renovation of their decaying tenements and provide their own services.
Fenced OUT (2001, 28 minutes)
A youth-inspired, produced and directed video created in collaboration between FIERCE, Paper Tiger Television and The Neutral Zone.
Fenced OUT documents the struggle of LGBTSTQ youth of color to save the Christopher Street pier and the West Village from re-development and gentrification. While researching the history of the pier, FIERCE members discovered past generations of queer peoples’ fight for use of public spaces at Christopher Street and the piers.
Rezoning Harlem (2008, 40 minutes)
Directed by Natasha Florentino and Tamara Gubernat
Rezoning Harlem follows longtime members of the Harlem community as they fight a 2008 rezoning that threatens to erase the history and culture of their legendary neighborhood and replace it with luxury housing, offices, and big-box retail. A shocking expose of how a group of ordinary citizens, who are passionate about the future of one of the city’s most treasured neighborhoods, are systematically shut out of the city’s decision-making process, revealing New York City’s broken public review system and provoking discussion on what we can do about it.
This event is the closing party for the We Won’t Move exhibition at Interference Archive.