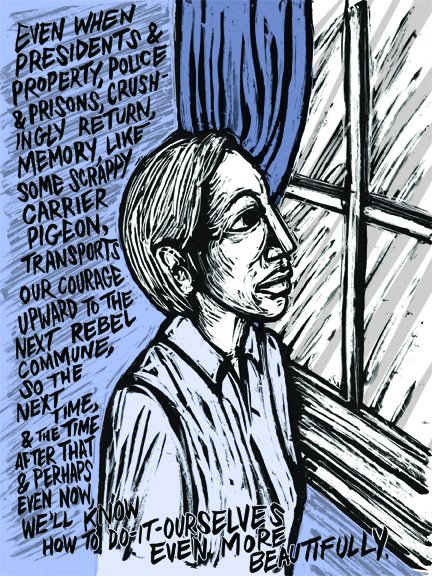 Nothing is more romantic than utopia, even on the night after Valentine’s Day!
In a talk and slide show, Cindy Milstein and Erik Ruin will draw from their new collaborative picture-essay book Paths toward Utopia: Graphic Explorations of Everyday Anarchism (PM Press, 2012; foreword by Josh MacPhee) along with other visions to offer various angles on how people have tried to answer the question, “What does utopia look like?” They encourage audience members to bring their own utopian image (borrowed or made) to share and discuss.
Spread the word and invite others; here’s the Facebook invite: http://www.facebook.com/events/401440016615739/
And if you can’t make this talk, you can catch them on Thursday, February 14, 7:00 to 9:00 p.m., at Bluestockings Bookstore, 172 Allen Street, NY, http://www.facebook.com/events/401440016615739/
Cindy is a collective member of Interference Archive in Brooklyn as well as the Institute for Anarchist Studies. She’s been involved in various self-organized projects, including Black Sheep Books, Station 40, and Occupy Philly, and was a participant-writer of the Quebec student strike in Montreal this past summer. Cindy authored Anarchism and Its Aspirations (AK Press, 2010), has essays in anthologies such as We Are Many (AK Press, 2012), and blogs at cbmilstein.wordpress.com.
Erik is a Michigan-raised, Providence-based printmaker, shadow puppeteer, illustrator, and more. He also occasionally edits/publishes various publications, including the anthology Realizing the Impossible: Art against Authority (with Josh MacPhee, AK Press, 2005), and various art/book/music projects on the mini-label Desperate Commodities, co-run with Reid Books. He frequently works collaboratively with activists and other artists, most prominently/consistently Justseeds Artists’ Cooperative.
We’ll have books for sale, and donations are welcome to support the archive, but no one will be turned away for lack of funds.