What is Wanted and What is Needed? A Screening & Discussion with Daniel Tucker on Election-Season Future Imaginaries 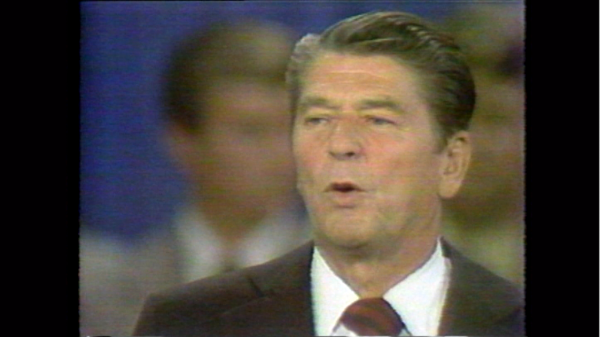 Saturday, April 2nd, 7pm
7pm Discussion and Presentation of Archival material with Daniel
7:30pm Screening of Future Perfect: Time Capsules in Reagan Country
Artist, organizer and writer Daniel Tucker will be in town from Philadelphia to share his new feature-length video essay and mine the collection of Interference Archives to facilitate a discussion on the topic of Election-Season Future Imaginaries. While Presidential elections may have been treated as a distraction from grounded and locally-invested politics in recent decades, there is little disagreement today that the political spectrum is being dramatically re-articulated on the national scale. This screening and discussion will locate itself initially in the 1970s during Ronald Reagan’s first Presidential run as an occasion to examine the emerging rhetoric of the future as articulated by Reagan in contrast with the futures that were projected by materials found in IA from that time through the present. For those that want to examine some materials selected by Tucker from IA’s collection please come early or stay late.
More about the video and the artist:
Future Perfect: Time Capsules in Reagan Country (TRT: 54min)
by Daniel Tucker
Ten years after his death and 25 years after the fall of the Berlin Wall and Ronald Reagan’s departure from the office of the President of the United States, this work grows out of an interest in the continued echoes of a speech delivered by Reagan following the end of his Governorship in California on August 19th, 1976 at the Republican National Convention in Kansas City, Missouri. In this speech Reagan talks of the difficulty he found in writing a letter for a time capsule to be sealed in Los Angeles and opened one hundred years in the future. Departing from this moment Future Perfect explores Reagan’s future-oriented science fiction imagination and rhetoric through visits to Reagan-inspired monuments and time capsules throughout California. Score by Tim Kinsella and Todd Mattei (Chicago), Additional Camera by Emily Forman and Steve Rowell (Los Angeles), Edited by Valerie Keller (Philadelphia). The work was made possible through support of the artist-in-residence program of Grand Central Art Center – a unit of California State University, Fullerton, with partial funding support from The Andy Warhol Foundation for the Visual Arts.
Daniel Tucker works as an artist, writer and organizer developing documentaries, publications and events inspired by his interest in social movements and the people and places from which they emerge. His writings and lectures on the intersections of art and politics and his collaborative art projects have been published and presented widely. Tucker earned his MFA from University of Illinois at Chicago and BFA from the School of the Art Institute of Chicago. He collaborates on the Never The Same curatorial and archive project with Rebecca Zorach and recently completed his first feature-length video essay Future Perfect: Time Capsules in Reagan Country. He is currently curating the exhibition and event series Organize Your Own: The Politics and Poetics of Self-Determination Movements. Tucker is an Assistant Professor and Graduate Program Director in Social and Studio Practices at Moore College of Art and Design in Philadelphia.
Daniel’s website: miscprojects.com