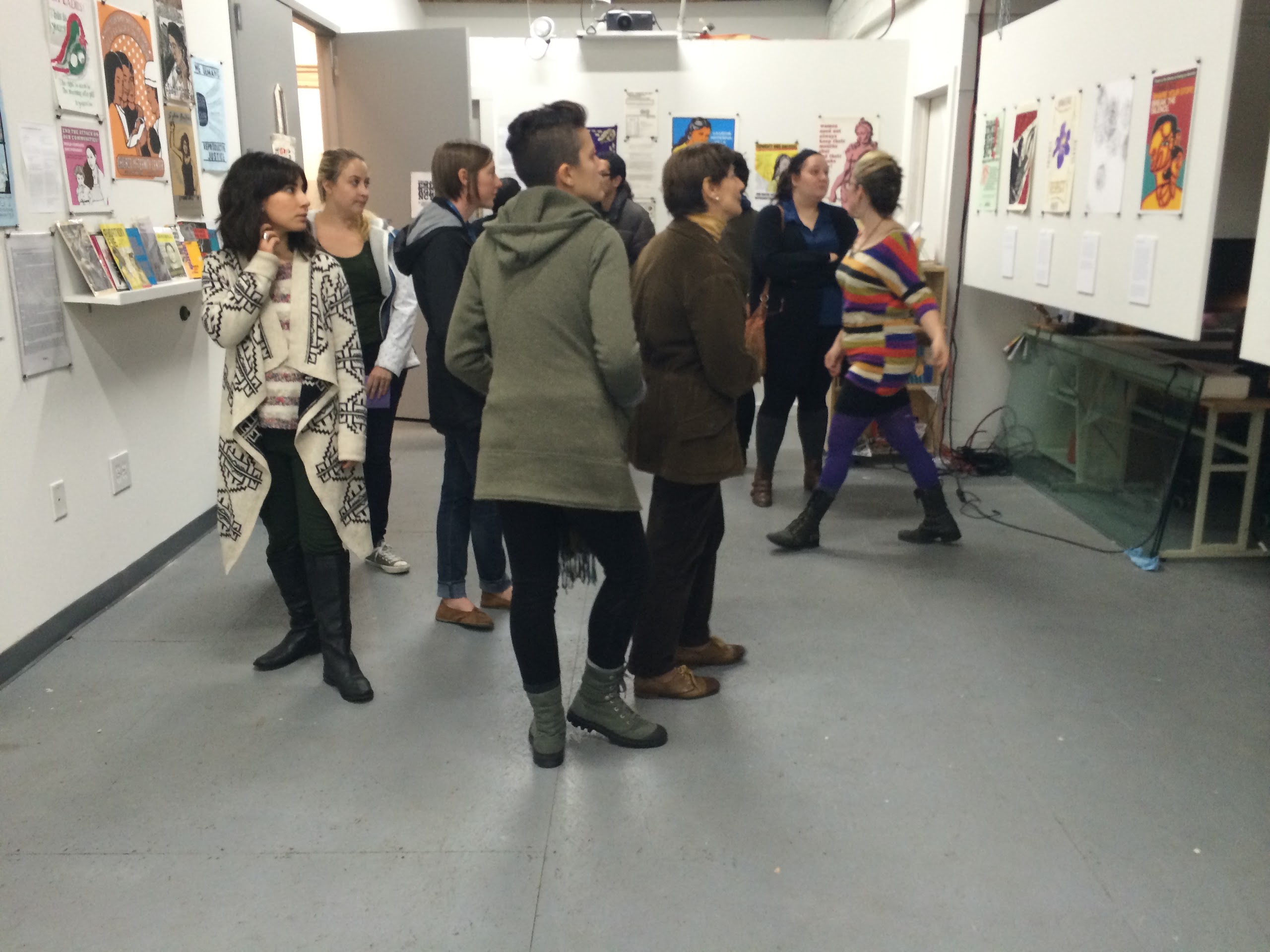 What makes art activist? What makes it political? Does who is using it matter?
The Interference Archive is uniquely situated as both a living collection of activist cultures and ideas, and a site of popular education and engagement with these ideas. One way we integrate these facets is by offering lectures/tours/workshops to groups and classes. I recently taught an interactive workshop on activist printmaking and political art at the Interference Archive, where I currently volunteer on the cataloging team and work on my political art research as the Resident Scholar.
For the workshop, in order to reflect the content of the class who was visiting, I wanted to highlight feminist printmakers who create paper-based works that support both global and local liberation projects. I also wanted to select works that have an activist lens which encompassed the struggles and experiences of women of color and allies.


Using these criteria within the collections at the Interference Archive, we still have a lot of options to choose from. I pulled out the files for three printmakers’ work:
Melanie Cervantes [dignidadrebelde.com/‎],
Mary Mack Tremonte [www.marymacktremonte.org/‎],
and Favianna Rodriguez [favianna.com/‎].
After I spoke about the Archive’s genesis, and gave some history of the popularization of screen printing in the US*, we began to examine pieces in the IA. While flipping through the files and handing some of the pieces around — this object-interaction one of the unusual and wonderful things about the IA — we talked about the questions above and then some:
What makes a print political? Why would we call this poster “activist”? What are the determining factors to call this “art” and what kind of art? Are all prints in some way activist because of the history?

Trying to define “political art” or “activist art” is a challenge many people have thought about. Is it helpful to first define politics, activism, or art? The political is then any element that relates to the governing, autonomy, liberty, freedom and choices of a group of people. Activism can be thought of as actions made from a cultural, identity, or moral imperative with a desired effect. As for art…
In Strategic Visibility, artist and art critic Nato Thompson states, “it is the total lack of classically defined utility that tends to be the signpost for most things arty.” For those of us interested in art that has a specific function, effect, or utility — inspiring activism or disseminating political content, in this instance — he suggests that a radical critical approach is to ask “not ‘is it art?’ ” but “what does it do? … what effects are we interested in [it] producing?”**
Instead of “art,” artist and Georgetown professor Nicholas Mirzoeff uses the term “visual culture” for the hyper-visuality of everyday life; for the things we look at every day which are produced in and from a visual discourse, or conversation, with the things around them. Further on in that essay, Mirzoeff positions “visuality within a discursive field of power where visual sign systems are deployed to achieve certain ends,” and argues that, “visuality is a strategy. It is not neutral. ”
Political art can thus be understood one way as the non-neutral strategy of using visual culture within social and protest movements to achieve certain ends. This makes it teleological, or goal-oriented, in its messaging. This is the “activist” part — some effect, or utility, is hoped-for in producing it. So, looking back to posters: why would we call them activist? If they are part of a conversation which includes a call to action. For political posters, this call to action is non-market based, and can come from a cultural or moral imperative rather than a call-to-action that comes from a shopping imperative.
But the message would be a bit hollow if the production was not also looked at as potentially activist or political, right? The message of a political poster, for example Melanie Cervantes’s Brown and Proud, pictured, is political because it relates to the autonomy of a group of people. This example is out of Dignidad Rebelde, the graphic arts collaboration between Oakland-based artist-activists Jesus Barraza and Melanie Cervantes, who “believe that art can be an empowering reflection of community struggles, dreams and visions,” and who “create work that translates people’s stories into art that can be put back into the hands of the communities who inspire it.”*** The making is political because it comes from a 100-year-old printmaking tradition where individuals or groups create a work that urges liberation, made in a non-exploitative way, via collective process  while poaching the tools of industrial mechanics like screenprinting, graphic design, and photocopying.
Because political/activist art is both by and about utility as well as politics, and communities as well as activists, it’s inherently tied in to the people making it and the intended audiences for it. The individuals and groups who make this kind of cultural production are primarily movement actors [e.g. activists] within the communities meant to experience and co-create the work, artists, cultural activists, tool-having professionals, also often from within the communities of interest. These groups are far from mutually exclusive and often involve a lot of cross-over.
Political art is criticized for being too didactic, that is too blatant, loud, or uncrafty about it’s intentions. But, if we see it as visual culture, as part of a conversation, then we can allow it to intentionally make a point: for example, to be Brown and Proud is a good thing. It’s also criticized for lacking effect in lieu of more “direct” activist tactics. While we can also not assume that the creation of any revolutionary cultural item is enough to incite revolution, it’s also unfair to assume that the production of something that of revolutionary cultural voice is a failure. Most political art does not have a set space for responses, as in the gallery settings which fine art does, or in the market reports which commercial art generates.
To review, I think the factors that define political art are effect/utility in the message, awareness of politics in the production,  and community engagement or voice. What do you think? What else is there to consider? Who else is talking about this work in ways you want to engage with?
***********
The Interference Archive is open to the public Tuesday, Wednesday and Sunday from 12-5pm, and
by appointment for individuals and classes to get customized tours. Event listings and more are at: www.interferencearchive.org, or email interferencearchive [at] gmail.com to book your class visit.
Hadassah Damien is the Resident Scholar at the Interference Archive. Her work examines political icons in activist art, and she’s researching in the Archive to build out a digital humanities project that includes an online catalog of Raised Fist images. See more here: www.raisedfist.femmetech.org
***********
Footnotes
*Check out Paper Politics, Post-Digital Print [PDF], or this interview with historian Lincoln Cushing for some of that history.
**Nato Thompson, Strategic Visibility; A Project by Four Artist/Researchers, in
Art Journal, V 63 N1 Spring 2004 pp 38 – 40 http://www.jstor.org/stable/4134473. p39.
***About Us, http://dignidadrebelde.com/section/view/about_us

Next Post: Statement from Librarians and Archivists to Palestine 2013 Delegation >