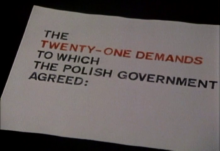 In 1980, American filmmaker Jill Godmilow was coincidentally in Poland when a shipyard strike led to a social movement around the first independent labor union in a Soviet-bloc country. But when Godmilow tried to return to Poland to film, her visa entry was denied. In Far From Poland, she sets out to literally reinvent the documentary form by scrutinizing her original intention to make agitprop. The resulting film depicts the workers movement against the “workers state” and points to futures outside the absurd duality of the Cold War.

This forward-looking movie serves no nostalgia: time is spent with people paving the post-communist road forward according to their own values, without the old language of party socialism. As a mix of documentary, Polish jokes, re-enactment, dreams, and soap opera (“I’m tired of all these Poles sleeping on our sofa!”), Far from Poland has serious resonance today. As she dramatizes the struggle to make sense of this movement from the outside all the while refusing to reproduce the “compassionate voyeurism” of the American documentary tradition, Godmilow speaks directly to our everyday inability for solidarity.

This event is part of the exhibition Agitate! Educate! Organize! Agit Prop into the 21st Century, which is a project sponsored, in part, by the Greater New York Arts Development Fund of the New York City Department of Cultural Affairs, administered by Brooklyn Arts Council (BAC).