From Fukushima to Indian Point – We Are All Connected 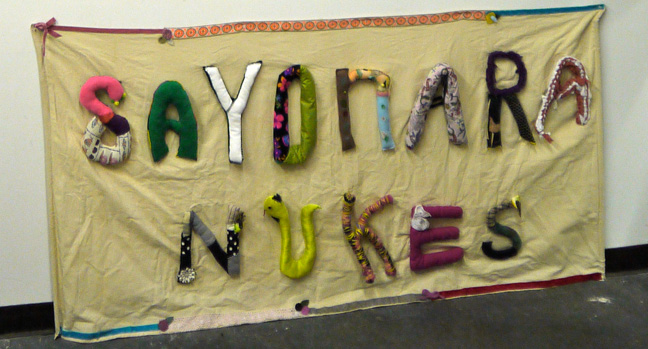 March 11, 2014 marks the third year anniversary since the beginning of Fukushima Daiichi disaster.   There are actions happening all over the world to demand accountability from TEPCO and the Japanese government, and a call to end to nuclear power.
Two years ago, Interference Archive and Todos Somos Japon collaborated on an exhibition to show the creative resistance of people fighting against nuclear power called RadioActivity! Anti-nuclear Movements from Three Mile Island to Fukushima.  We explored the culture of anti-nuclear movements and how they have addressed a multitude of issues including feminism, anti-militarism, anti-capitalism, peace, alternative energy, environmentalism, and most important, everyday survival.
Here are some photos from the show of banners used in demonstrations.  Watch for them in the streets in the coming days:

Fuck Nukes, 2011
NU*MAN
Fabric banner
Courtesy of Irregular Rhythm Asylum
The 怨 [grudge] was a symbolic word used during the ‘Minamata disease struggles’ in the 1950’s stemming from the mercury poisoning of citizens of Minamata, a small fishing village in Kumamoto Japan.  After the cause of the sickness was discovered, the company responsible and the government minimized the health effects and denied compensation to the victims.  Years later the survivors and victims’ families took their claim to the court in Tokyo, and in the course of the protest the word “grudge” (written in a single letter) began appearing, often a white symbol on a black flag.  The present anti-nuclear protests against the government and TEPCO, is almost a mirror experience from the Minamata struggles, so the “grudge” symbol has been repurposed since the history of the 1950’s resistance has reemerged in people’s consciousness.
Photos by Yuko Tonohira