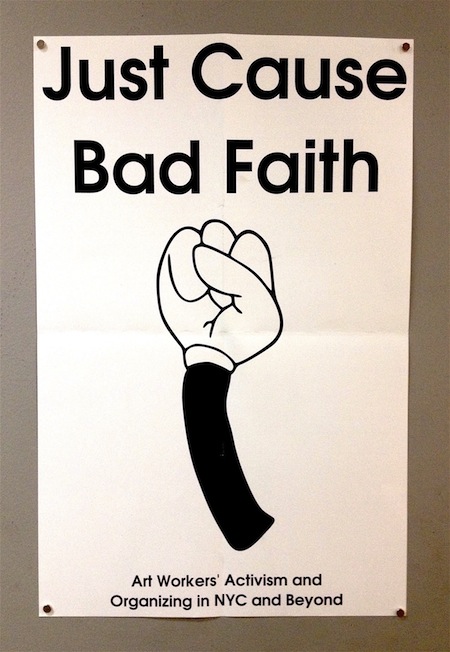 Art Workers of New York, Unite!
by Tiernan Morgan on December 11, 2015. Originally published here in Hyperallergic.
“We’re like the roadies of the art world,” states Shane Caffrey in his 2010 video announcement for the first Art Handling Olympics. “It’s not an art piece, it’s a community event … it’s a thing for a community that has never really had any chance to get together.”
Displayed on a wall-mounted iPad, Caffrey’s announcement is one of handful of art works and ephemera included in Just Cause: Bad Faith — Art Workers’ Activism and Organizing in NYC and Beyond, a small exhibit spotlighting the activities of New York’s artist-led activist groups. The show is a collaboration between the Interference Archive and the Art Handlers Alliance of New York (AHA-NY), a group dedicated to the protection of art handlers rights.
New York has a rich history of artist-led activism, from groups such as the Art Workers’ Coalition (AWC), who are widely credited with the introduction of free entry days at New York’s museums, to W.A.G.E. (Working Artists and the Greater Economy), an advocacy group that continues to campaign vigorously for the payment of artist fees by nonprofits. The exploits of New York’s activist groups are documented in a timeline that stretches across the entirety of one of the exhibition’s walls.
The AWC is regularly cited in discussions of artist-led activism (largely thanks to Lucy Lippard’s documentation of the group’s activities), though its antecedents included organization’s such as the Artists’ Union (1933–42) and the John Reed Club (1929–35), both of which are name-checked in the exhibition’s timeline. This chronology is complimented by Antonio Serna’s “Documents of Resistance: Timelines” (2015), a pair of visual timelines mounted upon tabletop trestles. Serna’s collection of collaged photographs specifically documents the activist history of artists of color. Neither display is comprehensive, but together they give a taste of the continuum from which contemporary activist groups operate.
Despite the nods to New York’s activist history, Just Cause is primarily concerned with foregrounding contemporary organizations such as AHA-NY, Teamsters Local 814, and W.A.G.E., who together dominate most of the space. An entire wall is dedicated to ephemera from the 2011 Sotheby’s lockout, the ten-month labor dispute during which art handlers represented by the Local 814 union refused to agree to concessions demanded by the auction house. A settlement was eventually reached after Sotheby’s dropped Jackson Lewis, a law firm held in low esteem by the International Brotherhood of Teamsters. The union’s placards utilized the image of Edvard Munch’s “The Scream” (1893). Ironically, Leon Black purchased one of Munch’s pastel renditions of the painting atSotheby’s for just under $120 million in May 2012 — a month before the art handlers dispute was eventually settled.
Humor is a recurring motif throughout the exhibition. As well as clips from the Art Handling Olympics, the exhibition also includes the 2015 New York City Freelance Art Handlers calendar (a copy of which is proudly displayed at Hyperallergic HQ). Suspended from the ceiling is Clynton Lowry’s “Custom Moving-Blanket jacket” (2013), which is described as an example of “fashionable utilitarian workwear for the urban artist/nomad.” Lowry is the founder and editor-in-chief of ART HANDLER Magazine, copies of which are available for visitors to peruse.
One of the most engaging artworks on display is Jo-Anne Balcaen’s “Job Titles by Rank and Alphabetical Order, Version 2” (2015), in which viewers are invited to edit two columns listing various museum positions. The column on the left lists job titles by perceived rank, whilst the column on the right lists the same positions in alphabetical order. A visitor had scrawled “intern” at the bottom of the first column, which left me wondering whether Balcaen had knowingly omitted the position from her list.
During the opening of Just Cause, I briefly popped into the Interference Archive’s library and open stacks collection. Founded in 2011 by artists and activists Kevin Caplicki, Molly Fair, Dara Greenwald, and Josh MacPhee, the Interference Archive is dedicated to “explor[ing] the relationship between cultural production and social movements.” Its archive includes books, flyers, posters, audio-visual recordings, photographs, and even T-shirts. The nonprofit space, which is entirely volunteer run, accepts both monetary and archival donations. Open every Thursday through Sunday, the archive is available to anyone who wishes to browse its collection. “There are no white gloves,” co-founder Josh MacPhee told The New York Times in a 2013 profile. “Anyone can come in and take something off the shelves and use it.”