if a song could be freedom mixtape 015 – Doom Gloom and Hope! by Paul Messersmith-Glavin 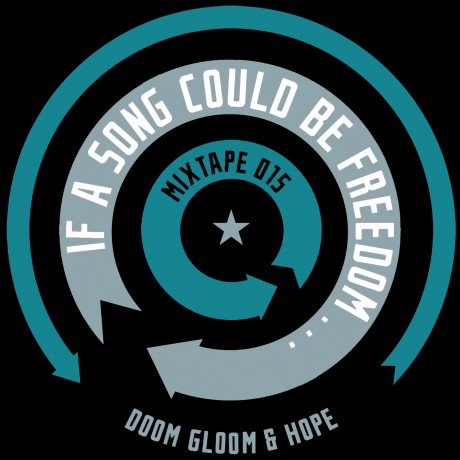 I grew up in a working class neighborhood in Chicago, predominantly Catholic, with Irish, German, Polish, Puerto Rican and Asian folks. For us boys, our form of rebellion was growing our hair and listening to metal and progressive rock (prog rock).  Our embrace of metal expressed our anger, pain and defiance, while prog rock, bands like Yes and Genesis, captured our highest aspirations, representing the utopian amidst the decay and concrete grey of our existence.  I didn’t meet kids into punk or New Wave until I meet people from the suburbs, and got into punk and industrial after high school when I started working at the underground radio station WZRD, The Wizard.

This playlist includes both familiar, classic rock bands, like Black Sabbath and Judas Priest, as well as newer bands like The Sword and Witchcraft.  An encouraging recent development is women fronting or playing key roles in metal bands, including bands like Windhand, Electric Citizen, and Eight Bells.  Chicago’s Mount Salem represents this here.

Metal and Prog rock continue to be my go to musical choices.  Metal is currently enjoying an innovative revival, with bands like YOB leading the way. Enjoy!

Triumph – Fight the Good Fight
A Canadian metal band who once boasted they would eventually be bigger than that other Canadian band, Rush, this is an anthem it’s hard to get out of your head once you’ve heard it: “Don’t get discouraged, don’t be afraid, we can, Make it through another day, Make it worth the price we pay.” I first saw them play at the Aragon Ballroom, waiting in line in the alley next to the venue in high school.

Black Sabbath – Into the Void
Sabbath are the progenitors of what has come to be called Doom Metal. Sabbath lyricist and bass player Geezer Butler has consistently dealt with political themes in his songs.  This is one from the album Masters of Reality, which also features Children of the Grave.  This song deals with a bleak future, but also contains the hopeful story of people leaving the Earth “where the flame of life burns low, everywhere is misery and woe, pollution kills the air, land and sea” to “make a home where love is there to stay, peace and happiness in every day.” Yeah.

The Sword – Dying Earth
A relatively new band, being around about twelve years, The Sword, clearly inspired by Sabbath, are a hard touring band, one of the only ways bands can make a living these days.  This song deals with themes similar to the previous one, but over thirty years later, there is no hopeful element: “There may come no tomorrow so all live for today, And the crimson twilight turns to grey, As the earth prepares to die, The waning sun fades from the sky, Here at the end of all time, Our slow demise becomes sublime.”

Judas Priest – Revolution
Described by a friend and comrade as being like an angry Queen in their early prog days, Judas Priest went on to found a whole genre of metal, and introduce metal culture, and gay culture, to each other;  Leather …: “Here comes the revolution, Time for retribution.” Saw them on our wedding anniversary last year, and they were better than ever.

7 Year Bitch – No Fucking War
Val Agnew, 7 Year Bitch’s drummer, rejects attempts to lump the band in with the Riot Grrrl phenomenon, stating they were more influenced by metal.  Coming out of the Seattle grunge scene, they were close to, and inspired by, Mia Zapata and her band, The Gits. This song was written at the time of the first Gulf War, when No War stickers and posters appeared all over Seattle; not No War, but No Fucking War! “We’re gonna take it to the streets, Start a fucking riot, I wanna fucking riot, It’s time to fucking riot, Who wants a fucking riot?”

Queen – Tenement Funster
“Give me a good guitar, And you can say that my hair’s a disgrace … When you’re young, and you’re poor, and you’re crazy.”  Song by drummer Roger Taylor rather than Freddie Mercury, Queen started out pretty proggie, then became very poppy, but throughout they did it with flair, creativity and panache.  And their guitarist, Brian May, is an astrophysicist!

Jethro Tull – My God
Both the name of side two of the 1971 album Aqualung, and its first song, My God shares anarchists’ hostility towards the Christian church: “He is the god of nothing –if that’s all that you can see., You are the god of everything — He’s inside you and me., So lean upon Him gently, and don’t call on Him to save you, from your social graces, and the sins you used to waive.”

Rush – Farewell to Kings
Rush lyricist and drummer – the “new guy,” who replaced original drummer John Rutsey in 1974 – Neil Peart, describes himself as a Left Libertarian, which in my book means anarchist.  This is clear in much of the band’s lyrics – despite an early interest in the writings of Ayn Rand (that was a long time ago, Peart explains) – in which he deals with themes of integrity, honesty, and non-conformity.  Rush was a real inspiration to those of us who didn’t like what we saw going on, and thought we could do better as a society.  This song reminds me of Marge Piercy’s Woman on the Edge of Time, with its emphasis on our collective responsibility to the future: “When they turn the pages of history, When these days have passed long ago, Will they read of us with sadness, For the seeds that we let grow? We turned our gaze, From the castles in the distance, Eyes cast down, On the path of least resistance.”

Witchcraft – If Wishes Were Horses
I saw this band with my partner Lara and some friends about eight years ago.  They are a Swedish band, singing mostly in English, and I felt like I was watching a band from the early ‘70s, all long hair and bell-bottoms:  “They want our thoughts overshadowed, They steal our time with their dirty games, We’re so easily controlled, Perhaps that’s what we want to be.”

Mount Salem – Lucid
Formed in Chicago in 2012, Mount Salem cite as their influences Black Sabbath, Witchcraft, the Jefferson Airplane and Deep Purple, good company indeed.  Lucid conveys terror: “I’m stuck in lucid dreams, Haunted by distant screams, And I’m as dark as night, You’ll be fearing for your life, Thought this would pass through, But it’s been so long, I took a step through, Another realm, This time it’s different.”

YOB – Burning the Altar (live)
YOB formed in the early 2000s and, after an initial assault, broke up.  Front man and guitarist Mike Scheidt, formed Meddian for a period, a more jazzy metal band, then in 2008 reformed YOB with fellow Eugene, OR resident Travis Foster (with YOB since 2003) on drums and Portland bass player Aaron Rieseberg.  The reformed YOB leads the Doom Metal scene, and has been said that they “might be one of the best bands in North America” by the New York Times.  They capture the rage and despair of humanity at the tipping point, while expressing deeply personal themes: “Burning eyes brim with tears, Heavy heart clenched like a fist, Grasping hope with hands in flames, Burning ashes, Burning to the core.”

Melvins – Youth of America (live)
I first saw the Melvins at Satyricon with my old Chicago friend Frank, in Portland in ’91. I just recently saw them again in Portland.  (While waiting in line I pulled out my phone, and it was calling Frank, who’s been dead three years.  My partner Lara said he was tapping me on the shoulder.) Melvins opened the show sampling the cough from Sabbath’s Sweet Leaf, then let the song start as they took the stage.  King Buzzo, the bands’ guitarist, vocalist, and guiding member in now 51 years old, but they again covered The Wipers’ Youth of America.  The Melvins bridge punk, metal and grunge. This is the defiant anthem we conclude with: “It is time we rectified this now, We’ve got to heal it now, Got to heal it now, now, now.” Melvins Rule: You Do Not.