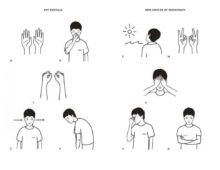 How can citizenship, nationalism and the state be reimagined to be more homely to neurodivergent people? Can shy, awkward and neurodiverse people be reimagined as dissenters, subversives and revolutionary leaders? How can art and performance reimagine identity and society to make life less alienating? From  Greta Thunberg to Patrick Pearse to Clement Attlee, how can Shy peoples changes the course of history.

Drawing from the worlds of teen movies, revolutionary constitutions and human rights law, the rhetorics of 1960s Liberation movements and anticolonial struggles, grunge and indie music and anti-psychiatry, Hamja explores these questions. Recent developments, such as the birth of the neurodivergent Labour movement, and attempts to recontextualise the project in Post-Tito Slovenia, will be further elaborated on.

Hamja will note how the Interference Archives collection of movements from COINTELPRO and Prisoner Solidarity helped the creation of his book. The talk will be followed by a book-signing.

Hamja Ahsan is an artist, writer, activist and curator based in London. He is the author of the book Shy Radicals: Antisystemic Politics of the Militant Introvert, and founder and co-curator of the DIY Cultures festival of creative activism, zines and independent publishing since 2013. He was shortlisted for the Liberty human rights award for Free Talha Ahsan campaign on extradition and detention without trial under the War on Terror. His recent writing was anthologised in No Colour Bar: Black Art in Action 1960-1990. He has presented art projects at PS1 MOMA New York, Tate Modern, Gwangju Biennale, Shaanakht festival Pakistan, Shilpa Academy, Bangladesh and most recently at Brown University’s Neurodiversity in Action conference. His practice encompasses all media: conceptual writing, building archives, performance, video, sound and making zines. He is currently working on a project on the role of zines in the Hillsborough Justice campaign, Britain’s largest police cover up. He is a guest lecturer in art practice across the UK and Continental Europe. His forthcoming exhibition will be in Ljubljana Biennial 2019 curated by Slavs and Tarter.

Gemma Sharpe is a writer and PhD candidate in Art History at the Graduate Center, CUNY, New York, where she researches internationalism, nation building, and issues of medium in South Asian art, especially Pakistan. She has worked for Afterall, Gasworks, and the Triangle Network in London, and has an MFA in Art Writing from Goldsmiths. She has published articles, catalogue essays and reviews internationally, and between 2011 and 2014 she was based in Karachi, Pakistan, where she taught in the Liberal Arts Department at the Indus Valley School of Art and Architecture, and worked as a Coordinator at Vasl Artists’ Collective. Her review of Shy Radicals was recently published in the Spring 2019 issue of Apricota journal (Secretary Press).