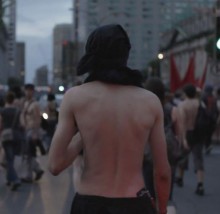 US premier of documentary and zine about the Quebec student strike!

Join the filmmakers of Insurgence for a screening and discussion on

Insurgence (Canada, 141 mins., color, French with English subtitles), made by a collective of filmmakers and film craftspeople Épopée, is a documentary about the vast social mobilization in Quebec during the spring of 2012. Initially propeled by the student strike for accessible education, the scope of the movement soon broadened to take on the government, the impunity and violence of the Montreal police force, the exploitation of untapped natural resources, and the current economic system.

Right after Insurgence premiered in Montreal, Adam Szymanski observed in a blog post: “[The] screening was electric. Insurgence takes radical vérité approach that bears witness to the student strike from an act of solidarity. The film feels utterly authentic. Perhaps this authenticity comes from its collective approach. It’s a film by he épopée action collective, not Rodrigue Jean. As a collective work, the film inserts itself into the dialectic of social struggle and the creative decisions pertaining to the production of film form and content grow out of this working from within. Insurgence is an innervating film that re-energized the sold out crowd who saw itself — and its political labour from the last six months — on screen in an intelligent way for the first time since the strike began. As my colleague DL remarked afterwards: ‘It’s like cinema is dangerous again.’ . . . There’s a reason the cops came to bust up the congregation outside afterwards” (photo below by Thien).

Épopée was created during the making of Men for Sale, a documentary about the lives of drug users and sex workers in Montreal. The group was also formed in the context of the digital revolution and the takeover of national cinemas by television and large distributors. Épopée reclaims the means of film production through a newfound creative and collective process. Between 2009 and 2012, Épopée set up a project in collaboration with sex workers and drug users in Montreal’s Centre-Sud neighborhood. The project resulted in a Web site (epopee.me), two feature films (The State of the Moment and The State of the World), and several gallery installations. A new feature film, Love in a Time of Civil War, written during the epopee.me writing workshops, began shooting in November 2012. 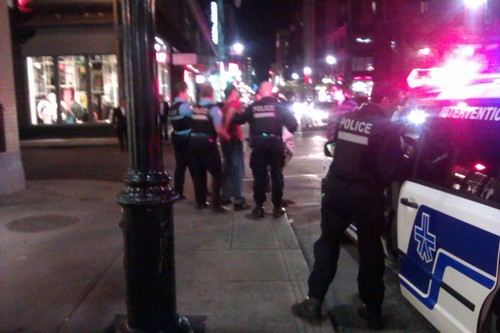 Le fond de l’air est rouge is a collection of texts about the 2012 Quebec student uprising by Montreal artist and activist Stefan Christoff. writer, musician, and revolutionary. Written between spring 2011 and summer 2012, this series of articles includes first hand accounts of the incredible street protests in Montreal and reflections on the student strike within the context of Quebec revolutionary history. Published by the Howl! arts collective (www.howlarts.net), this zine brings movement-based reporting originally published online into a physical format. The goal of this zine is to create a piece of cultural documentation on a key moment in Quebec popular history.

For sale during the screenings/discussions.